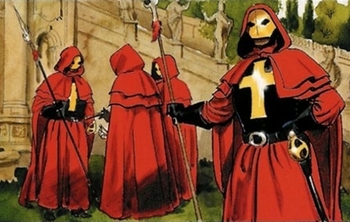 An organization of persons dedicated to enforcing a particular religion's laws, in a role similar to (or overlapping with) civil law enforcement. This is almost always in cases where there is no separation between religious and secular authorities, but not necessarily: it could be a Secret Society maintaining a Masquerade, in which case the Church Police are not their religion's public face, but rather a kind of Secret Police. They may do double-duty as monks (or priests) and cops. Sometimes they are even styled after monastic orders.

Very likely to be a State Sec. Knight Templars and Church Militants are to be found among their ranks. May be Well Intentioned Extremists. They are frequently Faceless Mooks in hooded robes. Often a symptom of the Path of Inspiration, the Corrupt Church, or on the far extreme, the Religion of Evil. However, on occasion, these groups aid the protagonists. Sub-Trope of Church Militant, and frequently overlaps with Culture Police. May be led by a Sinister Minister.

This trope also covers the closely related phenomenon of "internal" religious police, a very similar group as this, but strictly working within their own religious community and having no connection to an external state apparatus, and little or no jurisdiction over non-members.