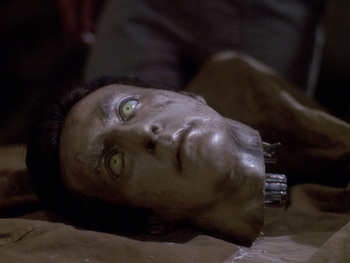 This is how the two-parter starts. And that's before they meet Mark Twain.
Advertisement:

The Enterprise is called back to Earth to investigate an unusual artifact in San Francisco, an ancient pocket watch and Data's head, apparently left untouched for five centuries. While examining it, Geordi notes that it has a microscopic life form on it native only to the planet of Devidia II. Picard sets a course to investigate. On the way there, the crew grapple with the apparent revelation that Data will at some point travel back in time to the 19th century and die. Data, however, is comforted that his life will have a conclusion, like any other life form.

At Devidia II, Picard orders an away team down to investigate some temporal disturbances. Troi detects invisible human life forms in the caverns. In spite of Picard's best efforts to exclude him, Data is needed to complete the survey. Data uses some Applied Phlebotinum to phase himself to where the humans are. He describes reptilian aliens feeding on the humans' energy near a trapped "ophidian" (a snake). But then Data gets caught in a temporal distortion opened by the aliens and stops communicating.

Data awakens in 19th century San Francisco, which is in the midst of a cholera outbreak. Convincing the locals that he is a Frenchman to excuse his strange outfit and mannerisms, he quickly sets about building a temporal device using the money he earns from playing poker. He spots Guinan's picture in the paper and rushes to meet her at an event she's attending with Samuel Clemens. Data assumes that she's traveled back to meet him, but she's actually just her 500-year-younger self. As they discuss the future, they realize that Clemens has been listening to their entire conversation, blowing Data's cover. Meanwhile, on the Enterprise, the crew prepare to use their own phlebotinum to jump back in time to rescue Data. Guinan tells Picard in no uncertain terms that he must go back in time as well, or less he and she will never meet.

At the beginning of part 2, we have Clemens trying to spread word about time travelers in their midst as Data and Guinan go about their temporal business. Meanwhile, two Devidians are lurking in the neighborhood sucking the life force from the vulnerable population. The Enterprise away team has established themselves as an acting troupe as they look for signs of Data and the Devidians. They quickly deduce that the Devidians are using the cholera outbreak as a cover for their life-sucking.

The Devidians arrive at the hospital where Crusher is staking out, and she summons the crew back for a big brawl. They drive off the Devidians and steal their snake-topped cane, which is some sort of temporal device. The brawl attracts the police, and they're chased away, but the temporal disturbances have alerted Data, and he arrives just in time to spirit them to safety. Guinan meets Picard for the first time, and he assures her that they will become "more than friends." The united group studies the cane and realizes that it can return them to their time if they get back to the temporally anomalous cave. They all depart, not realizing that Clemens is in hot pursuit.

In the caverns, Clemens tries to arrest the group for interfering with the timeline, but the Devidians arrive and attack. Data and a Devidian fight over the cane, which emits a blast of energy that blows Data's head off. A temporal gate back to Devidia II opens, through which one of the Devidian escapes. The crew follows, along with Clemens, leaving Picard behind with the unconscious Guinan, one injured Devidian, and Data's head. Picard questions the Devidian and learns that if the crew attacks their cavern in the 24th century, it will destroy the Earth through the temporal connection. Picard uses an iron filing to adjust Data's positronic brain to send a message into the future.

Clemens arrives in the 24th century and reclaims his pocket watch. When he's beamed aboard the Enterprise, he's amazed but horrified, assuming that militarism and the enslavement of other species now reign, while simple pleasures like cigars and chivalry are forgotten. Troi explains how the 24th century is actually pretty amazing, which eases Clemens's concerns. Meanwhile, Geordi tries to reattach Data's 500-year-old head to his body but has trouble. Eventually he finds and removed the iron filing from Data's head. When Data comes back online, he relates Picard's message to not attack the Devidians. Geordi has Riker call off their impending attack just in time.

Due to Techno Babble, the ship will need to adjust their photon torpedoes to attack the Devidians safely. Meanwhile, they have to send someone back to get Picard. Only one person can go back this time, and Clemens volunteers. He arrives in the cavern with the snake cane and explains how to use it. Guinan bids farewell to Picard for 500 years, but for him it will only be a few minutes. Picard jumps back to his own time and gets beamed away just before the Enterprise's torpedoes annihilate the Devidians. The day is saved. In the 19th century, Guinan is carried away in a stretcher, and Clemens remembers to leave his watch behind so that he will find it again in the past.