Recap / Star Trek: The Next Generation S5E25 "The Inner Light" 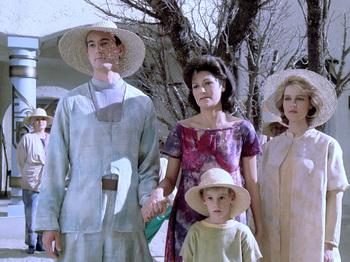 "Now we live in you. Tell them of us... my darling."
Advertisement:

The Enterprise encounters a probe of ancient design; when they attempt to scan it, it scans Picard, knocking him out and transporting him elsewhere, an earthy-looking place with a woman staring kindly down upon him. He assumes it's a holodeck program at first, but it's not, and the poor woman is a little disturbed by what she perceives as feverish rantings ("Computer, freeze program. Computer, end program!"). She then announces that this is their home... she possesses the air of a concerned wife...

Although Picard (understandably) has a lot of trouble accepting this place as his home, and this woman as his wife, he decides to play along after a bit. He discovers that his name is Kamin and his wife's is Eline, and he lives in the community of Ressik, Northern province of Kataan. This area has been, unfortunately, under a deep drought; yet the council leader (who seems more or less like a mayor) of Ressik, a kindly man by the name of Batai, has supervised the planting of a sapling in defiance and as a symbol of survival. He worriedly (yet patiently) helps "re-build" "Kamin's" memories.

Picard still possesses a great deal of reluctance, and why shouldn't he? He's been transplanted wholesale into another life. That night, he questions Eline about Kataan, and learns it's a pre-warp civilization (likely pre–space era as well, as they are only just launching their first missiles), and that he's an ironweaver (a blacksmith?); he does prefer playing the flute, however... and then he sees Eline's pendant, shaped exactly like the probe that zapped him...

Back on the Enterprise, Crusher examines Picard and finds that his vital signs are normal, but he has a very high amount of brain activity...

Five years pass on Kataan. Kamin has been very slow to forget his other life in the stars, constructing a telescope and spending a great deal of time alone in the wilderness, and Eline is beginning to get impatient with him. But he does have some ideas about dealing with the persistent drought. After a meeting with the rather Obstructive Bureaucrat administrator of several communities, Kamin realizes the government won't be providing any atmospheric condensers, which he recommended as a means to get more water, but he plans with Batai to build one of their own. Batai remarks that it's the first time Kamin acted like he belonged to the community in a long while. Later on, Picard announces his next construction project to Eline—a nursery.

Back on the Enterprise, the beam emitted by the probe is analyzed and it's discovered there's a way to reflect it back such that the signal is disrupted...

About three or so years later, we're back in Ressik, and focusing on a little girl: Meribor, Kamin and Eline's first daughter! Inside the house, we witness Kamin playing a tune he invented himself, with Eline cradling another child in her arms; we'll discover this is the christening ceremony for little Batai, named for the community leader and dear friend to all who died a year ago.

Data attempts to disrupt the beam, but Picard is immediately and severely affected, as is Kamin; it looks like he's having a heart attack! They hurriedly restore the beam, and Picard's vital signs return to normal. There's no cutting off the Lotus-Eater Machine yet...

Perhaps about 15 years later now, we rejoin Kamin and now grown-up Meribor, who is taking on the jobs of her father, including analyzing the poor soil in the community; it's completely infertile. It's not just a very long drought, Kamin has discovered, and Meribor expresses the belief that Kataan is dying. Kamin also gives Meribor his blessing to marry a boy in the community, basically saying "carpe diem."

Back on the Enterprise again, Geordi and Data reveal to the crew that the probe came from the star system Kataan, whose sun went nova about a thousand years ago...

Maybe about two or three years after the last Kataan scene (perhaps, it's not clear how much time has passed) Kamin looks through the telescope he built over thirty years ago, while Eline (who should have been resting from a recent surgery?) says she can't ever understand why it so interests Kamin and Meribor. Inside the house, now-grown Batai is heard playing the flute; apparently he's going through phases of hobbies, and announces his desire to leave school to pursue music. Despite initial reluctance, Kamin says they'll discuss it, to which Eline is surprised; Kamin explains his belief that they don't know how much time they have to pursue any dream. He's going to talk to the Administrator tomorrow about something, with the worry that he'll probably be kicked off the Council.

That doesn't happen. Although the Administrator is initially dismissive of his claims, Kamin is persistent in demanding that the Council listen to his evidence. Finally, the Administrator quietly pulls Kamin aside and tells him the Council doesn't need to hear his evidence because they already know about it; they've kept it quiet to avoid a panic since they lack the technology for anyone to escape their dying world. The Administrator does tell Kamin that there's a plan to save something of Kataan, but can't reveal any more yet... Then Batai calls for Kamin, urging him to come back to the house; poor Eline is dying. Her last words carry on their Running Gag of her telling him to put away his shoes...

The day of the probe launching arrives, and the entire community turns out to watch their heritage being shot into space. A very elderly Kamin reluctantly attends with Meribor and the balding Batai and old Kamin's grandson (Kamie, probably a pet name for Kamin), about three or four years old. What had been discounted as a dream years ago is brought back to him, as those he had thought dead (his aged wife Eline, his friend Batai) return, youthful again, to tell him that this rocket is the same probe that he encountered while on the Enterprise. And that it was him, Picard (though they don't use his name, because they didn't have any way of knowing it) for whom the probe was meant, and entreat him to tell others of their life and history... And the simulation ends.

Though Picard experienced more than 40 years of Kamin's life, Riker claims Picard has only been unconscious for about half an hour. Shocked at being returned to a time and place he had long ago discarded as fantasy, he retreats to his quarters... Then Riker comes along and presents an item that was found within the probe; a flute which Kamin had played and become quite skilled at. Picard reacquires the skill almost instantly, and plays the same Naming Ceremony tune to celebrate the birth of the son he never had.

Tropes provided by "The Inner Light":