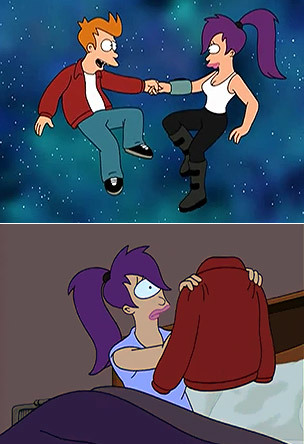 "If a man could pass through Paradise in a dream, and have a flower presented to him as a pledge that his soul had really been there, and if he found that flower in his hand when he awake — Aye, what then?"
— Samuel Taylor Coleridge
Advertisement:

An object that proves the adventure the main characters had written off as All Just a Dream was not a dream after all. Usually something relatively small and conspicuous, which may have been a MacGuffin at a previous stage of the story. It's found shortly after the protagonist "wakes up", and usually right after they begin to question the reality of their experience. It may be used in The Stinger. Sometimes it's never found by a character, and is only shown to the audience in a kind of wink from the creator, but this can leave the audience unsatisfied, as it leaves the characters believing that their entire adventure never happened.

This can be played with elements of ambiguity. Sometimes the keepsake is definitely from the dreamworld and even has supernatural powers; at other times, it's a relatively mundane trinket whose presence is at best somewhat implausible, and which may have alternate explanations. Worse, finding an item from a dream can lead a character to question the reality of their waking life.

This plot device isn't only employed in dream sequences. Many a protagonist has returned from the Magical Land with a souvenir, sometimes a powerful one that will give them an edge in their ordinary life. This way, the audience is assured that they won't languish in mundanity from now on. At the least, the item can be used to quell people who doubt the protagonist's story, though few will be really convinced.

Sister trope to Fantasy All Along.

Commonly an Ending Trope, so beware of spoilers.