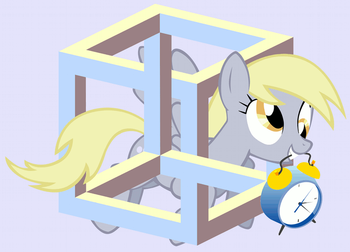 "It’s just an average daaaaaay..."
A series of My Little Pony: Friendship Is Magic fanfics by Meta Four, mostly centering on Ditzy Doo (aka "Derpy Hooves") — a pegasus from Ponyville's weather patrol who sees the world a bit differently than everyone around her.
Advertisement:

Where others see an eccentric rural town, Ditzy sees spatial anomalies, Fae creatures, and Eldritch Abominations. And she's committed to protecting her friends and neighbors—and their sanity—from all of the aforementioned. Ditzy eventually finds out that she isn't the only pony protecting Equestria from the shadows, and that the world is stranger than even she thinks.

The stories are, in publication order:

for a listing of the stories in chronological order. And this post

for a filk theme song.

Compare and contrast with Elementals of Harmony.