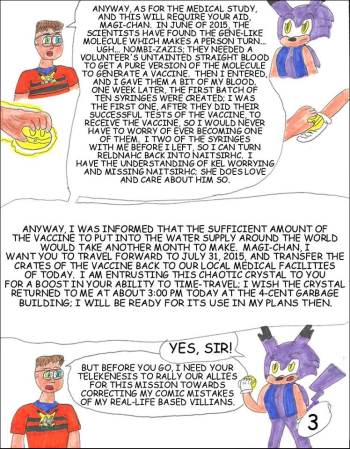 My God, it's full of words! (And not much else.)
Rival's Pidgeotto: I can blow you all off this bridge with one wing tied behind my back.
Jasmine: Wait, since when were we on a bridge?
— Azza's Nuzlocke Run, Nuzlocke Fan Comics

Conversations don't take place in a vacuum. Other things don't stop happening just because characters are talking. Many beginning writers forget this, writing long chunks of dialogue without any narration or dialogue tags to break it up, and in the process, the reader becomes lost in the Featureless Plane of Disembodied Dialogue.

Like an unintentional version of the White Void Room or Blank White Void, the reader is given no reminders of the setting in which the dialogue actually occurs: For all they know, the scene could be completely bare and blank, with nothing to look at, no other characters and absolutely nothing occurring whatsoever aside from the dialogue in question. In the very worst cases, the writer may fail to even set the scene in the first place, giving the reader absolutely nothing at all to visualise what's happening. Another problem is that it's easy to lose track of who's saying what, especially if there are more than two characters involved in the conversation.

Sometimes an author may do this on purpose, for example to keep The Omniscient Council of Vagueness appropriately vague. Other than that though, the Featureless Plane Of Disembodied Dialogue is uncommon in published literature, because professional editors tend to frown on it quite heavily. It's very common in live theatre, however, since it's easier to strip the stage bare of scenery than it is to transform from one set to another.

The trope also finds quite a bit of intentional use in stylized visual media for a number of purposes: Film Noir, for instance, is fond of using Chiaroscuro and minimalist staging to put an extreme focus on the actors and dialogue. Part of Alfred Hitchcock's Signature Style involved abstract shots giving this impression to create a dream-like disconnect between characters and their surroundings, while Akira Kurosawa and Sergio Leone together cemented it as THE trope for tense confrontations where the scope of the world is reduced to the participants and their immediate surroundings (if that far). More esoteric works frequently seek to further separate dialogue and context- say, a conversation is carried out in voiceover while closeup shots of various objects in the room are displayed.

Compare Script Fic; indeed, many examples of this trope are script fics clumsily converted into prose to get around FanFiction.Net's ban of the format. See also Talking Is a Free Action, Wall of Text, Inaction Sequence and Speech-Centric Work. When the dialogue itself is being used as a substitute for describing the scene, see Show, Don't Tell and Expospeak.