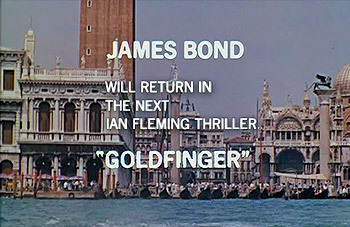 Sometimes, creators feel the need to stress to the audience that a work is part of an indefinite ongoing series, in order to make sure that they look for the next installment. A particularly unsubtle version of this is to simply announce it in an out-of-universe caption instead of "The End". The traditional format is some variation of "[HERO'S NAME] will return".

Sometimes this can be the sad sign that a work was intended to launch a Stillborn Franchise.

Not to be confused with And the Adventure Continues, which is where the intended final installment of a work doesn't have a permanent ending, but suggests that the characters will continue adventuring into the future, or with I Shall Return, which is a character saying this in story as a promise or threat. See also To Be Continued for more serialised works, and Sequel Hook for an intentionally conspicuous plot loose end that could provide the seed for a sequel.