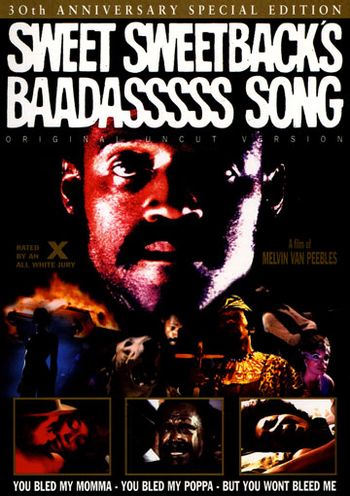 Sweet Sweetback's Baadasssss Song is a 1971 film by Black American director Melvin Van Peebles, widely considered the Trope Maker/Ur-Example of the Blaxploitation genre (though it is not an Exploitation Film itself).
Advertisement:

Opening with the dedication: "This film is dedicated to all the Brothers and Sisters who had enough of the Man"; a young African American orphan (played by Melvin Van Peebles' son, Mario) is taken in by the proprietor of a brothel in Los Angeles in the 1940s. One of the prostitutes there entices him to lose his virginity to her, and due to his sexual prowess and large penis, she nicknames him "Sweet Sweetback". Sweetback grows up, and now played by Melvin himself; he has become the brothel's most celebrated sex-performer. After his show one night, two crooked cops arrest him. On their way to the station, the two also arrest a Black Panther named MuMu, and handcuff him to Sweetback. MuMu insults the officers, so the two stop and beat him up. Sweetback is angered, and attacks the officers. With the police after him, Sweetback flees to Mexico, aided on his way by the entire black community as well as by a biker gang who he impresses the female leader of by having sex with her.

Director Van Peebles was fresh off directing the race-reversal comedy Watermelon Man when he developed the idea for this film when he stopped his car out in the Mojave Desert one day. Because no studio would finance it, he directed, wrote, produced, scored and acted in the whole thing himself, up to and including doing his own stunt work. He was, however, able to score a $50,000 dollar loan from Bill Cosby. When the film was finished, it was rated X by the MPAA, inspiring the tagline; "Rated X by an all-white jury" (it would be re-rated R three years later). Because of this rating, it couldn't be advertised in newspapers, so Melvin did the promoting for it himself too. What's more, only two theaters would play it. But despite all this, Melvin's hopes were not in vain. The film became a runaway success, grossing $4,100,000. It became required viewing of the Black Panthers. Because of its success, filmmakers started seeing the potential for profit in directing films catered to black audiences, and thus was born Blaxploitation. All-in-all, this film is essential viewing for anyone interested in either film history or black history.

In 2004, the aforementioned son, Mario, wrote, directed and starred in BAADASSSSS!, which dramatized the film's production and release.

In December 2020, it was selected for preservation by the Library of Congress for National Film Registry.