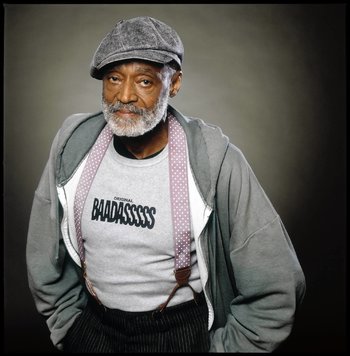 Melvin Van Peebles (born Melvin Peebles; August 21, 1932 - September 21, 2021) was an American filmmaker, playwright, director, actor, writer, and musician. After being disgusted with the portrayals of black Americans in film, he shot two short films (despite having no prior film-making experience) in 1957, Sunlight and Three Pick-up Men for Herrick. Van Peebles did not find any success in Hollywood during that time and decided to move to Europe where he found more success in distributing his films and getting recognition. Hollywood producers then started to take notice and he found more work as a director.

It was the film Sweet Sweetback's Baadasssss Song, that Van Peebles directed, wrote, produced, and even acted in which was his breakout into the mainstream. It was financed by Bill Cosby who gave Peebles a $50,000 loan to produce the film. Despite bad reviews and being Rated X, the film was an instant hit with black audiences and is widely credited to have started the blaxploitation film genre with many films trying to cash in on the success.

Van Peebles was also a Renaissance Man in the creative arts; in addition to being a filmmakers, he was also an author of several books and composed/made several albums and was actually thought of to be one of the first rappers back in 1968 (though it was more of a spoken-word album spoken rhythmically).

He was the father of actor and director Mario Van Peebles.