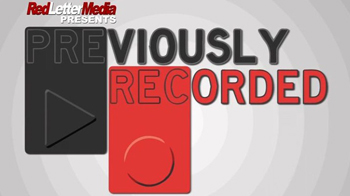 The third spinoff from RedLetterMedia, Previously Recorded (or Pre-Rec) is hosted by Rich Evans and Jack Packard, two RLM regulars. Unlike all other spinoffs, Pre-Rec is hosted on its own dedicated YouTube channel, never appearing on the main RLM channel. Instead of focusing on film, the show turns its attention to video games; regular livestreams of various games are also featured on YouTube

. Unlike RLM's previous shows, Pre-Rec does not feature guest contributors, though many of the other RLM crew show up in streams.

The core show is a sit-down discussion between Jack and Rich, in which they analyze a game or game-related subject. The pair also stream a number of games that they both have and have not reviewed, during which they will answer questions from viewers. Other members of RLM, particularly Jay, will occasionally stop by to watch a stream.

On July 22, 2018, the duo announced that no new videos or streams would be made and that they would end the channel. Their last stream was on July 25, 2018. Jack, although he has continued to appear in Best of the Worstnote albeit less often than he used to both because of his professed dislike for the informational videos they watch in Wheel/Black Spine episodes and because he is a recovering alcoholic and was known for getting very smashed during the discussion panels with free-flowing booze, would join The Escapist in 2019 and begin a spiritual sequel to Pre-Rec called Underdeveloped.