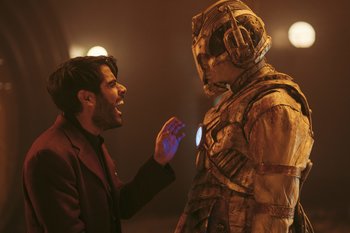 "Any idiot can make themselves into a robot. It's not special. But if you want to be the dominant force in the universe, I can facilitate that."
Advertisement:

The one where the fandom collectively owes Philip Hinchcliffe an apology and canon is changed drastically.

At the Boundary, the Master makes the Doctor come to ruined Gallifrey with him by threatening the lives of the humans with her. Onboard the Cyber Carrier, Yaz and Graham's group manages to escape the control room, losing someone in the process, but they're still trapped with the Cybermen. Ryan, Ethan and Ko Sharmus have to fight squads of Cybermen sent by their fanatical leader who have come to kill them.

And on ruined Gallifrey, the Master has a truth for the Doctor about the nature of the Timeless Child...