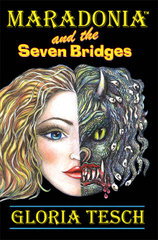 "Fifteen-Year-old Maya and her Fourteen-Year-old brother Joey noticed a gap in the fence of a ‘Government Owned Property’'"
— The first line of the first book.

The Maradonia Saga, written and self-published by Gloria Tesch, self-defined "One of the Worlds Youngest Novelist", starts as an everyday story. Then a girl called Maya and a boy called Joey find a World between the Worlds: Maradonia. Upon their arrival a prophecy is fulfilled, whereby they have to try and change the future of Maradonia.