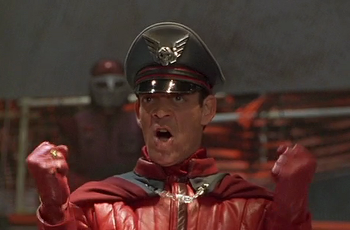 Raúl Juliá's ham and Street Fighter's cheese makes for one delicious combination.
"I figured if I was going to do this stupid movie, I might as well have fun and go as far over the top as I possibly could. All that eye-rolling and foaming at the mouth was me deciding that if I was going to be in a piece of shit like that movie, I was going to be the most memorable fucking thing in it. And I think I succeeded."
— Michael Ironside on his role of General Katana in Highlander II: The Quickening
Advertisement:

Say you're an actor and a damn good one at that. You're hot stuff in Hollywood, with directors throwing money at your feet to be in their film. So you pick the one that gets you the most cash or sounds the most promising in general. It'll all be fine, right?

You arrive on set to find what seems to be a film Gone Horribly Wrong, complete with Special Effects Failure, bad actors and a worse script. So what do you do? You could go "Screw This, I'm Outta Here", storm off and refuse to associate with the film ever again, you could take the film seriously, try with all your might to make it work... or you could unleash The Hog, milk the giant cow dry, and chew the scenery into dust.

If it's going to be a well-remunerated bad movie, you might as well enjoy yourself, eh? And who knows? You might even end up saving the film.

You may notice that these performances tend to appear in tandem with ones that Took the Bad Film Seriously if only because they are such obvious Foils for each other. Also, compare One-Scene Wonder; both roles/actors in these films play memorable, often over-the-top enjoyable performances and can make them one of the best parts of a film. Compare the Rule of Sean Connery; the rule often applies to actors who know exactly when to serve up the Ham and Cheese.

Can overlap with What The Hell, Casting Agency? and Awesome, Dear Boy. Compare Chewing the Scenery, Wag the Director. Contrast Took the Bad Film Seriously.

NOTE: This is not for listing hammy roles in good or even decent works. For the ham without the cheese, see tropes such as Large Ham and Incoming Ham for good alternates.

Amidst poor camera work, simplistic costumes, and laughable special effects, the fairies of King Apollyon declare their intentions to the heroes and audience with exaggerated hand gestures and emphasis on every syllable.

Amidst poor camera work, simplistic costumes, and laughable special effects, the fairies of King Apollyon declare their intentions to the heroes and audience with exaggerated hand gestures and emphasis on every syllable.