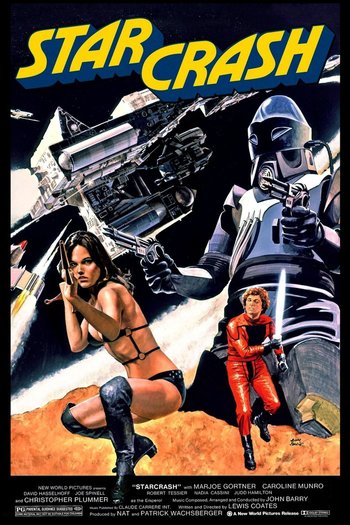 We'll scan it with our computer waves.
The only solution is to leave space and re-enter on the other side.
Advertisement:

In the late '70s, Italian director Luigi Cozzi attempted to capitalize on the success of Star Wars by creating a space movie with B-movie faves Caroline Munro and Marjoe Gortner, plus Christopher Plummer and a then-unknown David Hasselhoff. The result? STARCRASH!

The evil Count Zarth Arn (Joe Spinell) is threatening to take over the galaxy with the most powerful weapon in the galaxy. The Emperor's son has gone missing after this weapon destroyed his spaceship, and smugglers Akton and Stella Star must find him and destroy the weapon.

In 2017 it was included in the revival of Mystery Science Theater 3000. Tropes related to the MST3K episode are found here.