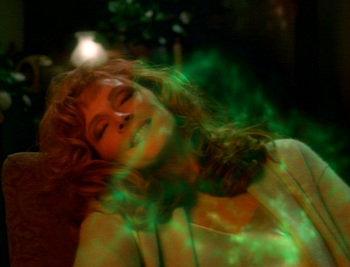 We open with Beverly Crusher giving the eulogy at the funeral of her grandmother, "Nana" Felisa Howard. As dirt and roses are piled on Grandma's casket, funeral goers begin to depart, but not before Beverly happens to glance toward a strange man. Their eyes meet for a moment before he walks off.

The planet they're on is Caldos, one of the first terraforming projects of the Federation, designed to look exactly like the Scottish Highlands. Governor Maturin asks Picard for help fixing the faulty weather control systems, and Picard agrees to stay for a few days. Meanwhile, Beverly and Troi wind up in Nana's old house, and Beverly reminisces about growing up with her. Troi fawns over an old lamp, which is a Howard family heirloom that symbolize "the enduring Howard spirit."

A man named Ned Quint slips into the house and blows out the candle in Nana's lamp. When Beverly confronts him, he claims that he was Nana's caregiver and that the candle has been a curse on the Howard family for generations. Beverly demands he leave, but Quint leaves her with some Cryptic Conversation about how he's not responsible for the consequences.

Back on the Enterprise, Data and Geordi try to fix the weather control systems with Governor Maturin but are running into a few problems, including an unprecedented storm approaching. Beverly arrives back on board and tells Picard about what she found in Nana's journal: She had a lover in his thirties when she was 100 years old. Beverly suspects that it was the man she saw at the funeral earlier. That night, as the doctor falls asleep while reading her grandmother's journals, the candle lights up in Nana's lamp, and Beverly's bedsheets and clothes start to be pulled away. "Beverlyyyyy..." says a voice as she wakes up startled.

Ned Quint walks off as green lightning flashes, driving Beverly back into the house. The Enterprise picks up the oncoming storm, puzzling Geordi and Data, who'd been working on the weather systems. Beverly finds the house's interior covered in flowers. She hears the "presence" again and sees a flash the mysterious man in a mirror.

The voice calling Beverly's name returns, and she identifies him as Ronin, the man at the funeral and Nana's young lover. He claims to have been born in 1647 in Glasgow, Scotland, and has spent the last 800 years seducing the women of the Howard family. He starts to give her "strange sensations," telling her that they are becoming one, but Crusher tells him to leave. But when Crusher meets Troi later, she admits that she's entranced by Ronin's charms.

On the bridge, the ship's environmental control are malfunctioning, causing the bridge to become carpeted by fog, Ten-Forward's temperature to drop below freezing, and deck 13 to lose gravity. This is due to feedback coming from a power transfer beam, which Data can't turn off and is forced to deactivate at the substation where it's originating. When Data and Geordi arrive to check it out, Ned Quint is trying to tear something out of the computer system apparently to banish Ronin, but a sudden electrical discharge kills him.

Beverly Crusher shows up at the station to inspect the body and determines that it wasn't a plasma discharge that killed Quint, but some other anomaly. Beverly leaves her medical staff to inspect the body, as she has to go back to her grandmother's house and get information out of the ghost. This time, Ronin appeals in corporeal form, which he says he can't do for long, while Beverly melts at his touch. He confirms that he can travel along the Enterprise's power transfer beam and instructs her to get back to the ship and light the candle... but not before a Big Damn Kiss, after which he vanishes!

Beverly gets back on the ship and lights Nana's candle. Sure enough, Ronin shows up, saying she's going to become a part of him, like all the Howard women before her. Beverly is overcome with excitement at this prospect, and we cut to her in the transporter room about to beam back down to the planet while dressed like an old woman. Picard comes in, horrified at her request to resign from Starfleet, but Beverly is adamant that she's going to live on Caldos and live like her grandmother did, and she beams down. Picard goes to talk to Troi, who is also concerned, and they agree that Ronin holds some power over her. Picard decides he's going to have a word with Ronin, while Data and Geordi also head down to Caldos to find an energy signature similar to what was found on Quint's body... and it's coming from Nana's grave!

Beverly and Ronin reconvene in Nana's old house, as Ronin attempts to "merge" with her in a big green ghost cloud. Suddenly, Picard walks in on Beverly being ravished by a space ghost. Picard wants answers from a reluctant Beverly, and when he won't stop asking, Ronin appears, proclaiming his love for Beverly and asking Picard to leave. Data pipes up over the com signal, saying that they're going to exhume Nana's body. Ronin protests, but Picard is done with Ronin's bullshit and probes him with questions. Ronin gets mad and gives him the same shock Quint got earlier. This time, Beverly is there to treat him, against Ronin's wishes. After some hypospray, Picard tells her to chase after Ronin, who is off to the cemetery.

Data and Geordi beam the casket out of the ground and open the lid to find Beverly's grandmother, who opens her eyes, sits up, and electrocutes Data and Geordi. Beverly gets there to find her dead grandmother looking at her and talking to her. Horrified, Beverly orders Ronin out of her Nana's corpse.

Ronin submits and appears. Beverly accuses him of giving her the same kind of anaphasic energy that killed Quint, and Ronin defends his actions. Beverly realizes that he's an anaphasic life form that needs to merge with hosts to maintain cohesion. The candle is his receptacle. Ronin resorts to threatening Geordi's life, and Beverly finally grabs a phaser and destroys the lamp. Ronin begs to merge with Beverly again, but she blasts him out of existence for good.

Back on the ship, Geordi and Data are all better, while Beverly confides in Troi that the whole thing made her a little sad, as whatever Ronin might have done, "he made Nana very happy."