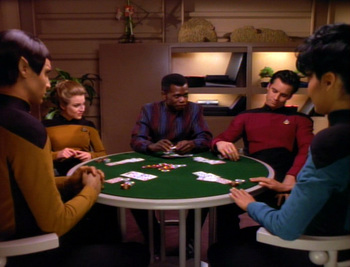 A closer look at the lives of the Red Shirts.
Not to be confused with Star Trek: Lower Decks, though this is the inspiration.
Advertisement:

Riker and Troi are in Ten Forward griping about having to fill out crew evaluations and hand out promotions. Little do they realize that the very people whose fates hang in the balance are staring at them from across the room. It's this group of junior officers we'll be focusing on this episode, all ensigns. They are Nurse Ogawa, a human helmsman named Sam Lavelle, a Vulcan engineer named Taurik, and a Bajoran security officer named Sito Jaxa (whom we've actually seen before in "The First Duty"). Their friend Ben, a bartender, spies for them and reveals that Lavelle and Sito are candidates for the same position at ops.

As the crew goes through some battle simulations, Picard suddenly enters from his ready room and orders a change in course, then calls a conference with his senior staff. When they’re gone, Sito notices that the change in course will lead them near the Cardassian border. Later in Ten Forward, Ben tells Lavelle not to be so intimidated by Commander Riker and recommends getting to know him a little better when they’re not on duty. The plan goes a little awry, though, because Ben mistakenly informs him that Riker is Canadian, and that’s the topic he chooses to start the conversation with. When Riker explains that he’s actually from Alaska, Lavelle notes, "Well, they both get a lot of snow," and awkwardly shuffles away.

Worf picks up an object on the ship’s sensors, which he identifies as an escape pod floating in Cardassian space. Picard orders that the occupant be beamed directly to Sickbay, and Doctor Crusher orders Nurse Ogawa to leave. Ogawa finds Sito standing guard to keep anyone but the senior staff out of Sickbay but neither one of them knows what’s going on. Picard comes by and orders Sito to follow him back to his ready room, where he suddenly starts to chew her out for the incident she was involved in at Starfleet Academy. He tells her she should have been expelled for it and says that he has no idea how she ended up on the Enterprise.

The junior officers are left in the dark as to what’s happening. La Forge has Taurik fire a phaser at one of the Enterprise’s shuttlecrafts, telling him that they’re performing a test of its hull resiliency. Taurik doesn’t object, but does point out that it’s obvious that what they’re really doing is making it look like the shuttlecraft has been attacked. Doctor Crusher, meanwhile, swears Nurse Ogawa to secrecy and brings her in to Sickbay, where she sees that the person they beamed aboard from Cardassian space is a Cardassian!

That night, both the senior and junior officers engage in their own poker nights. The ensigns (and Ben) talk about their superiors and what they think is going on. Nurse Ogawa saying nothing, true to her word. At the same time, the higher-ups gossip about the junior officers and discuss who to promote to ops. Worf sticks up for Sito, while Troi reminds Riker that he and Lavelle aren’t all that different. Another issue discussed at the junior officers’ table is Taurik’s concern that he’s put himself on bad terms with Commander La Forge, but that fear is put to rest when La Forge personally asks for Taurik to help him run some tests that Taurik had suggested.

The next day, Worf takes Sito aside at the end of his martial arts class and tells her she can move up to his advanced class if she can pass a surprise test. The test requires her to defend herself against him while she wears a blindfold and he does not. After he easily defeats her three times, she refuses to continue, saying that the test is unfair. Worf admits that it is and suggests that she stand up for herself the next time she's being judged unfairly. She gets his meaning and speaks with Captain Picard a second time. She tells him that all she can do is be the best officer she can be going forward, so if he's not going to give her a fair chance to do that, he should transfer her somewhere else. Impressed, Picard reveals that he was really just testing her to see if she had the guts to stand up to him because he wants her to participate in a secret operation. He also admits he specifically brought her to the Enterprise so she could have a chance to redeem herself.

The whole secret is finally revealed to Sito. The person in the escape pod was a Cardassian spy bringing secrets to the Federation. To get back across the Cardassian border, he’ll need to play the part of a bounty hunter returning with a captured Bajoran terrorist played by Sito. If all goes well, she’ll be sent back in an escape pod similarly to how they picked up the spy in the first place. Picard stresses that he’s not ordering Sito to go through with this, but Sito willingly volunteers. She and the spy set out in the phaser-burned shuttlecraft to make it look as if he is flying a stolen craft. The Enterprise waits for Sito’s escape pod, but after more than thirty hours, it still hasn’t appeared. In breach of treaty, Picard orders a probe to be launched into Cardassian space. The probe reveals the debris of a destroyed escape pod. Picard makes a somber announcement to the crew.

Picard: To all Starfleet personnel, this is the captain. It is my sad duty to inform you that a member of the crew, Ensign Sito Jaxa, has been lost in the line of duty. She was the finest example of a Starfleet officer, and a young woman of remarkable courage and strength of character. Her loss will be deeply felt by all who knew her. Picard out.

Lavelle is promoted to ops, but he feels guilty about how he got the promotion. Taurik tells him that the best way to honor Sito’s memory is to excel at his new position. Ben then sees Worf sitting alone and suggests he join Lavelle and the others. Worf protests that he was only Sito’s commanding officer, but Ben tells him that Sito considered him her friend. The episode closes as Worf joins their table.