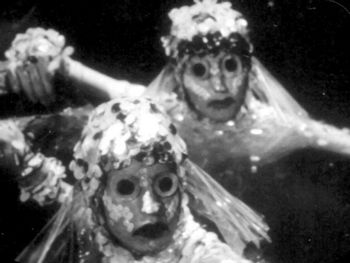 The one where Jamie slaps Polly.

Written by Geoffrey Orme. This four-episode serial first aired from January 14 to February 4, 1967.

The Doctor, with Polly, Ben and Jamie in tow, lands the TARDIS on a volcanic island where they are captured and taken into a cave complex. It soon becomes clear that this tiny island is all that remains of the ancient Atlantean civilisation.

Mad scientist Professor Zaroff (played with a Large Ham by Joseph Furst) has convinced the Atlanteans that he can raise the city from the sea, but in reality he plans to drain the ocean into the Earth's core and thereby destroy the planet. Just because, OK?

Polly is taken off to be converted into an aquatic Fish Person, while the others meet two shipwrecked sailors who help them convince the Fish People to rebel. Eventually, the Doctor manages to foil Zaroff's plan by flooding the city before he can complete the drilling. Zaroff drowns, but everyone else makes it out and the Doctor and companions depart.

For a long time it was thought that only Episode 3 remained, until Episode 2

turned up in 2011. They are the earliest Troughton episodes known to exist, as his first two serials remain lost in their entirety.