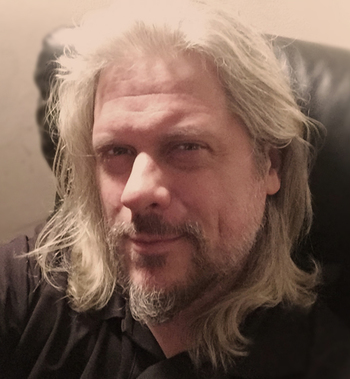 I have my own page now because I AM DAN GREEN!
Advertisement:

This page needs no description because it's voiced by DAN GREEN.

Green is known for his three vocal ranges: normal, little kid, and Large and in Charge. The last one is especially notorious due to his Cheesy Awesome voice acting for Yami Yugi in Yu-Gi-Oh! propelling him to Internet stardom, putting him on par with Crispin Freeman, Scott McNeil, and Christopher Sabat as the Ensemble Big Guys of Voice Acting during the early to late 2000s.

In late 2011, tragedy struck when Green's wife, his fellow VA Michal Friedman, died from a c-section after giving birth to their twins (a boy and a girl), leaving him a widower with two new mouths to feed. He became semi-retired for a while after this, but over the last few years has slowly been returning to voice acting. Green is also a voice over instructor at Edge Studios

Has a vocal doppelgänger in the form of England's Martin Billany, a.k.a. LittleKuriboh of Yu-Gi-Oh! The Abridged Series fame.

Either Dan or someone with his name (it's a common name) inks/has inked comic books.