Anime / Pokémon: Arceus and the Jewel of Life 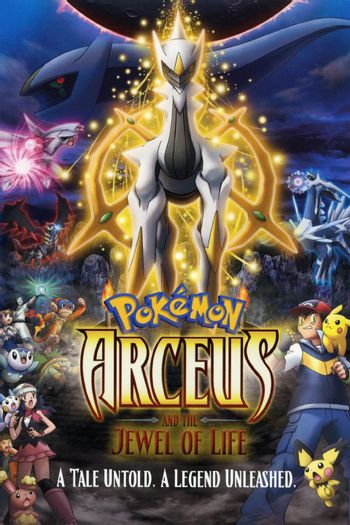 "A tale untold. A legend unleashed."

The twelfth Pokémon: The Series movie, which concludes the Story Arc set up in the tenth.

While the tenth movie introduced Dialga and Palkia, and the eleventh introduced Giratina, the twelfth introduces Arceus, who serves as the creator deity in Pokémon myth. As we learn more or less immediately, Arceus is not a happy camper and has every intention of bringing humans to Justice (read:annihilating all of humanity), starting with the town of Michina, the site of an age old betrayal.

Naturally, this happens just as Ash, Dawn, and Brock are passing through the town and visiting the local temple (the site of the betrayal). There, they meet the two temple guardians, Sheena (whom we care about) and Kevin (whom we don't), who appear and reveal that they have been charged with overseeing the sacred Jewel of Life, which gives life to the valley and was wrongfully stolen from Arceus in ages past by Sheena's own ancestor, Damos.

And good thing, too, because that just so happens to be when Arceus makes his appearance, in which he screams about Justice and starts laying absolute waste to the town and temple. Luckily, Palkia, Dialga, and Giratina all appear and decide to band together to hold Arceus back from destroying their pals, Ash and Pikachu. Sheena delivers Arceus the Jewel in attempt to make peace, only for everyone to discover that the Jewel is fake (and Arceus doesn't like that one bit). With the downward spiral of events suddenly accelerated, Dialga hurls Ash, the gang, and Sheena into the past to confront Damos, secure the Jewel of Life, and Set Right What Once Went Wrong.