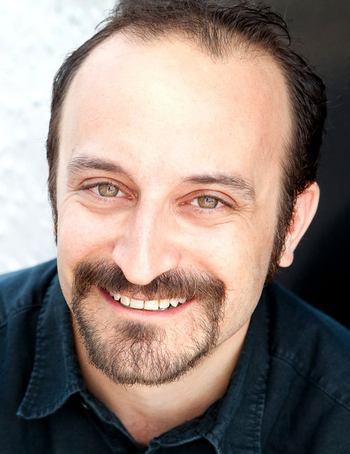 "BROOKLYN RAGE!"
Vinnie Penna (born September 22, 1974 in New York City, New York), known professionally as Wayne Grayson, is an American voice actor, who has worked for 4Kids Entertainment, Central Park Media, and NYAV Post. No, he is not Batman or the first Robin.
Advertisement:

Grayson is probably most famous for his role of Michelangelo in Teenage Mutant Ninja Turtles (2003), and Joey Wheeler in the English-language version of the Yu-Gi-Oh! anime. On his choice of Wayne Grayson for the role of Michelangelo, Lloyd Goldfine said:

When trying to decide who should play Michelangelo and who should play Donatello, I kept switching those parts between Sam Riegel and Wayne Grayson; one day Sam would play Mike and Wayne would be Don, but then I'd hear them messing around in the recording booth, doing each other's lines, and I'd think, "Hey... that sounds really good!" and so I'd switch 'em! I couldn't make up my mind! But finally it all crystallized; Sam became Don and Wayne became Mikey.

Wayne has said at conventions that he enjoys reading manga when he's free in the recording studio.

Apparently, he is aware of

Yu-Gi-Oh! The Abridged Series. What happens when Joeys meet? Well...