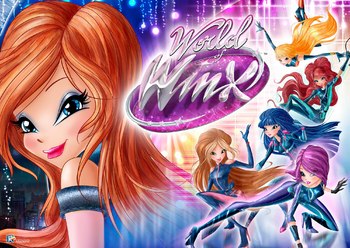 World of Winx is a spinoff of Winx Club, produced by the Rainbow SpA studio. It ran for two seasons of 13 episodes each, ending on an unresolved cliffhanger for a possible third season.
Advertisement:

On Earth, talented young people are being captured by a mysterious force dubbed the Talent Thief. The Winx, trying to avoid being seen as fairies, have to go undercover as talent scouts for WOW!, a Reality Talent Show hosted by a fellow named Ace in order to find out who is behind the abductions and rescue the captives.

In the second season, the Winx no longer work for WOW! as talent scouts, but as pop stars who form a band and take the world by storm for years. They also receive new missions from the Spirit of the World of Dreams, while simultaneously facing a jealous music critic who is intent on sabotaging their concerts.

As with the original series, there is a recap page here.

Opening theme to World of Winx.

Opening theme to World of Winx.