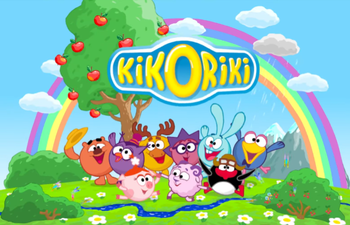 Known in its native Russia as "Смешарики" (Smeshariki, a Portmanteau that can be roughly translated as "Funballs"), KikoRiki is one of the more successful cartoon projects in The New Russia, a series of 6-minute animated shorts about nine highly-stylized, cute ball-like anthropomorphic animals living on the island of Chamomile Valley. note According to the current English translation, KikoRiki refers to both the island and characters as a whole. The show was launched in 2003 and ended in 2012, getting Un-Canceled eight years later in 2020.

The show often boils down adult themes such as prostitution, gambling, Internet addiction, etc. to a level at which children can grasp the basic concept through metaphor, and for its reflection of the eclectic culture of post-Soviet Russia. In the end, though, it remains and is seen as a fun, friendly children's show—just with heaps of Parental Bonus.

Was first dubbed in the United States by 4Kids Entertainment as GoGoRiki, which, in its usual fashion, changed all character names and removed many of the Russian cultural references. This dub aired in 2008-2009 on The CW4Kids and covered 104 episodes, though only 92 aired. Another English dub (which also covered 104 episodes) was made by Studio 100 in 2009, under the new title of BalloonToons. It would later be renamed into the show's German name, KikoRiki note Presumably named so after a German channel "Kika", which has stuck since then and was used by other countries. Another 75 episodes were translated by them in 2011, but with different character names (Which were composite between original Russian names, the ones used in 4Kids translation and Studio 100's ones. They would also stick and be used by later adaptations) and voice actors. Third, and the most complete dub was produced by FUN Union in 2017, which covered all 215 original episodes and several spin-offs.

To avoid the confusion, please refer to characters and episodes by their names from the FUN Union dub, which can be found here