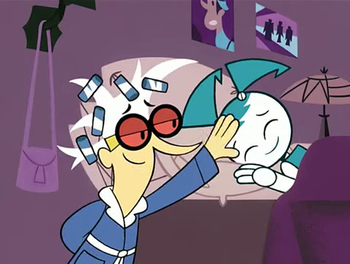 Artificial Family Member is when a creation is seen as family by its creator and vice versa. While the most standard portrayal of this is the creator being the parent and the creation being their child, other versions can occur.

While most often seen in the realm of science when creations are either robots, clones or other forms of Artificial Human, magic can also be used as a replacement.

There's a good chance that there will be actual blood ties as the creator might use their own DNA as a basic structure. Or better yet, they may have used someone else's DNA instead. The reluctant donor may not be too happy with the resulting offspring.

At a mundane level, this can apply to real life people like artists or writers and their creations as they may see them as family to some capacity.

A major difference between this and Robo Family is that the latter also covers examples of "families" consisting entirely of robots, whereas here the creator is almost always a human. Compare Pygmalion Plot, where the artificial being is treated as a Love Interest instead of a family member. Though, the two tropes can overlap. Compare Thank the Maker for when the creator of an artificial lifeform is treated more like a god. Can overlap with Secret Project Refugee Family.

Contrast That Thing is Not My Child!, where the creator rejects their creations.