Anime / Weathering With You 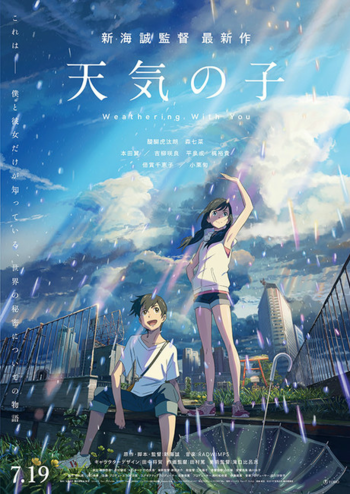 That summer day, up in the sky... We've dramatically changed the shape of the world.
— Hina Amano
Advertisement:

Weathering with You (JP: 天気の子 Tenki no Ko, lit. Child of Weather) is a 2019 Japanese animated fantasy-drama film. The seventh major release by Makoto Shinkai, it is produced by CoMix Wave Films and distributed by Toho with RADWIMPS returning for the score as they did in Your Name, bringing in Toko Miura as guest vocalist on some of the songs.

The summer of his high school freshman year, Hodaka Morishima runs away from his remote island home to Tokyo. Broke from the endeavor, he is forced to work for shady occult writer Keisuke Suga and the man's hanger-on Natsumi to make ends meet in the midst of unusually heavy rain. Assigned to track down rumors of a "sunshine girl" (JP: 晴れ女 hareonna), he finds her in the person of recently-orphaned Hina Amano, who apparently has the power to change the weather temporarily. Along with Hina's kid brother Nagi, they attempt to use this power to bring the sun back while making a living from the service, but when complications mundane and mystical make themselves known, Hodaka is forced to make some painful choices.

The movie was released in Japan on July 19, 2019, with 4DX editions starting September 27.

Worldwide releases followed afterward, including a premiere at the Toronto International Film Festival in September

, which is Japan's first submission

to the TIFF since The Wind Rises in 2013. An English dub produced by NYAV Post was released January 2020 by GKIDS. Japanese DVD and Blu-Ray release was on May 27, 2020. English digital release will be August 4, 2020, while physical release will be September 15,

and collector's edition with 4K will come out November 17.

A novel adaptation also by Shinkai was released on July 18, 2019, while a manga adaptation by Watari Kubota began in Kodansha's Afternoon on July 25. An audiobook of the novelization read by Hodaka and Hina's Japanese voice actors

It was put forward by Japan as their entry for the 92nd Academy Awards' Best International Feature Film category.

This was the first time in more than 20 years, since Princess Mononoke, that an anime had been chosen.

As per Handling Spoilers, trope listings are not to be spoiler-marked. Read on at your own risk!