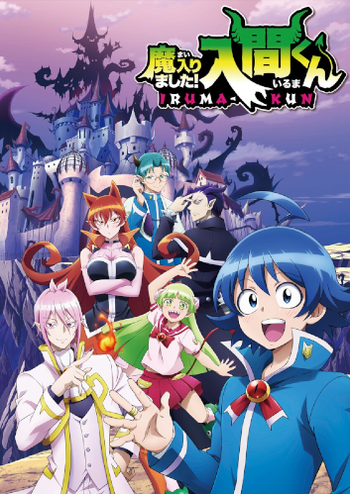 Iruma Suzuki is a sweet, normal boy whose irresponsible parents have led him time and again into life-threatening events. And this time, they've gone and sold his soul to a demon...who wants to adopt him as his grandson and send him off to a school full of demons! Now, Iruma must try to get through school without anyone finding out that he's a human.

An anime adaptation produced by Bandai Namco Pictures and directed by Makoto Moriwaki note  of Oruchuban Ebichu, Onegai My Melody, Tantei Opera Milky Holmes, Jewelpet Kira Deco! and PriPara fame began airing on October 5, 2019, the first season of which ran for 23 episodes. A second season began airing on April 17, 2021 and ran for 21 episodes. A third season has been confirmed to be in development and is slated to start airing in October 2022.

On January 9, 2020, a spin-off manga called We are the Main Characters of the Demon World! started its serialization in the same magazine.

On April 15, 2021, another spin-off titled Welcome to Demon School! Iruma-kun - Kalego Side Story (魔入りました！入間くん カルエゴ外伝, Mairimashita! Iruma-kun Kalego Gaiden) began its serialization alongside the main series. Much like the title suggests, the story focuses on Iruma's homeroom teacher Kalego Naberius during his time as a student in Babyls Demon School.

The second season opening lists all the members of the misfit class.

The second season opening lists all the members of the misfit class.