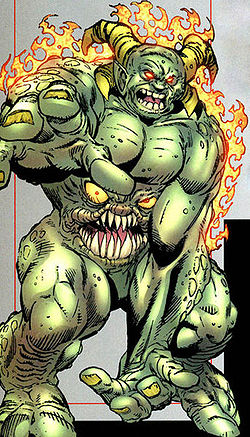 GET IN MAH BELLAY!
Advertisement:

A classic trope, the "belly mouth" or "bellymaw" is where a creature/character/machine actually has a mouth directly outside from its place in the body. Sometimes it's disguised and well hidden, other times it's used as an intimidation tool, or sign to state that the character in question is a Villainous Glutton, a Big Eater or somewhere in between when regarding the consumption of vast quantities in (usually) organic material, even going so far as to make it out to be a horrifying monster, or from time to time, a comical character.

Note: In some cases, the belly mouth is actually a symbiotic creature, or has a mind of its own, that uses the host's body to get about, while adding an additional passage to the stomach via which more consumables can enter.

For a much more Freudian, disturbing variation on the "mouth in the wrong place" theme, see Vagina Dentata.

Compare Cephalothorax, where the only mouth the creature has is, technically, on its belly.

Sub-Trope of Too Many Mouths.