Film / Faust: Love of the Damned 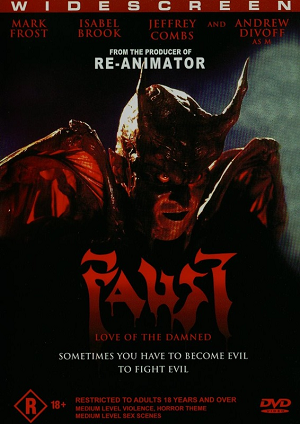 Faust: Love of the Damned is a 2000 action-horror movie starring Mark Frost, Jeffrey Combs, and Andrew Divoff, and directed by Brian Yuzna, based on a comic book series of the same name by Tim Vigil and David Quinn.

After artist John Jaspers's (Frost) girlfriend is murdered by a bunch of thugs, he is offered "the power of vengeance" in exchange for his soul by a mysterious figure known only as "M" (Divoff), the leader of a satanic organization called The Hand. Jaspers becomes a superpowered demonic entity who exacts revenge on those who wronged him, but it turns out that M has other plans for him in mind to bring about the end of the world.