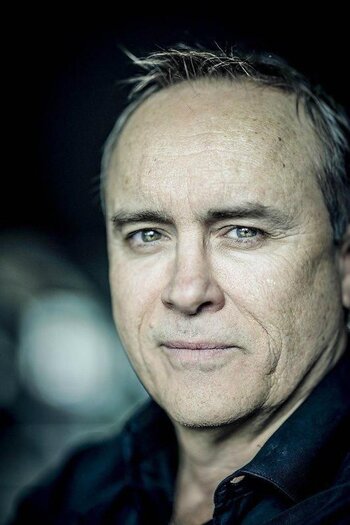 He starred in Re-Animator and its sequels as H. P. Lovecraft's mad scientist Anti-Hero Herbert West. Combs also appeared in Re-Animator's companion piece, From Beyond, and in many lesser Lovecraftian projects of varying quality. He's also known for portraying Edgar Allan Poe in Television films such as The Black Cat and in his critically acclaimed one-man show Nevermore.

Combs' most notable of his numerous roles in Star Trek are Weyoun (several times over) in DS9 and Shran in Enterprise. He also plays the Ferengi Brunt in DS9 as well as several one-shot roles throughout the series - in one episode of that series, he even played Brunt and Weyoun (though neither was onscreen at the same time). He was so well-received as Weyoun that the idea of the Vorta being clones was created specifically to bring him back.

Combs lent his voice to The Question in the DCAU, portrayed as a nervous-brilliant Conspiracy Theorist in Justice League Unlimited. (He would go on to voice two characters who work for the conspiracy, Headmaster Hayden Montag and Dr. Charles Zurn, in The Secret World.) Combs also voiced the redesigned Scarecrow in The New Batman Adventures.

One of his most well known voiced roles is Ratchet in Transformers: Prime and Transformers: Robots in Disguise. He also voiced The Leader, H.P. Hatecraft, Kite Man, Soul Sever, and Rat King.

Jeffrey Combs is particularly recognized for his distinctively creepy voice, which has led him to an increasing amount of work in animation over the last decade. The ironic thing? That's not his real voice. Watch any interview with Combs

and you'll hear that his natural speaking voice sounds nothing like the idiosyncratic intonation and slimy tone of his "acting voice" that he uses in every single role, regardless of whether he's playing an intentionally creepy character or even a heroic badass. That's right, Jeffrey Combs has been vocally typecast.

Now has a Quotes page in progress.

This actor has appeared in: