Film / Would You Rather 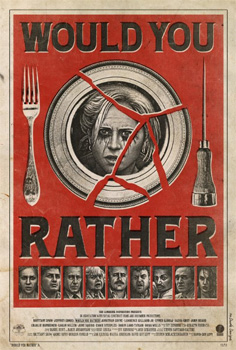 The Fancy Dinner from hell.
Advertisement:

Unemployed, cash-strapped, and with terminally-ill brother Raleigh in need of a bone marrow transplant, Iris (Snow) accepts a dinner invitation from mysterious rich guy Shepard Lambrick (Combs) to compete for the financial aid they desperately need. It turns out that the titular game forces each participant to choose from one of two increasingly unpleasant choices.