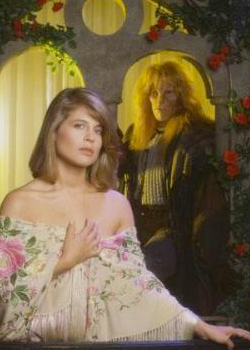 Once upon a time in New York...
"This is where the wealthy and the powerful rule. It is her world... a world apart from mine. Her name... is Catherine. From the moment I saw her, she captured my heart with her beauty, her warmth, and her courage. I knew then, as I know now, she would change my life... forever."
"He comes from a secret place, far below the city streets, hiding his face from strangers, safe from hate and harm. He brought me there to save my life... and now, wherever I go, he is with me, in spirit. For we have a bond stronger than friendship or love. And although we cannot be together, we will never, ever be apart."
— Vincent and Catherine
Advertisement:

Beauty and the Beast is a 1980s CBS TV series produced by Republic Pictures, loosely inspired by the fairy tale of the same name but set in modern-day New York City. The series lasted from September, 1987 to August, 1990. A total of 56 episodes in three seasons.

The premise was simple. Catherine Chandler (Linda Hamilton), a lawyer, is abducted, beaten and left to die in Central Park. She is then rescued by Vincent (Ron Perlman), a leonine member of a secret community of outcasts living in tunnels under the city ("The World Below"). The series then focused partly on the attraction between the two characters, and partly on the cases Catherine encountered in her new career as an assistant district attorney, facing crime drama situations that affect both her world and his.

Many of the episodes were penned by none other than George R. R. Martin, who later became famous for his A Song of Ice and Fire series of novels.

A remake/reinterpretation of this series, starring Kristin Kreuk and Jay Ryan, premiered Fall 2012 on The CW. Its page can be found here. All tropes for the new series should be placed there.