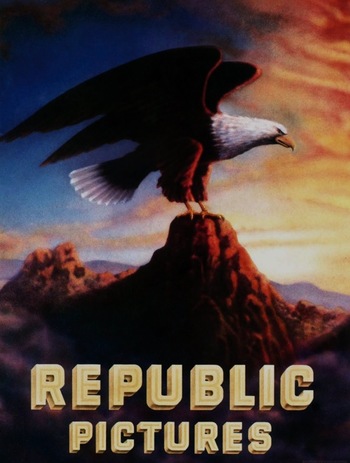 Republic Pictures was one of Hollywood's biggest B-movie studios during its heyday—founded in 1935, it specialized in B-movies, Westerns, and serials among other genres, launching the careers of John Wayne, Gene Autry and Roy Rogers amongst others.

The company was founded in 1935 by the merger of six different independent film studios. You see, a man named Herbert J. Yates and his film lab, Consolidated Film Industries, had been offering their services to smaller, low-budget outfits (frequently known in Hollywood as "Poverty Row") for some time. With the Great Depression going on, six studios — Monogram Pictures, Mascot Pictures, Liberty Pictures, Majestic Pictures, Chesterfield Pictures and Invincible Pictures — were all in debt to him. He decided to have them merge into one large company, under his leadership, or else face foreclosure on their debts. Republic Pictures Corporation was formed as a merger of these six studios, each of which brought something different to the table. Monogram, the largest of the six, was the B-movie maker and had a nationwide distribution system. Mascot had the serials and the most technologically advanced studios in the field, and had just signed Gene Autry. Majestic had a knack for making low-budget films appear high-budget, with big stars and rented sets. The duo of Chesterfield and Invincible were skilled at mysteries and melodramas. As for Liberty, well... Republic adopted their Vanity Plate (a ringing bell tower, which was later replaced by the eagle you see on the right).

However, despite the promises made to the partners of now being able to have higher budgets, and independence from each other in exchange for cooperating to help Republic as a whole, it didn't really last when Yates began to assert authority over his new studio, and many of the other partners left by 1937 — Monogram was reactivated as a separate company (and eventually became Allied Artists), and others left for places like Columbia Pictures (then still a Poverty Row firm). With Yates now firmly in place as head of Republic, the studio began cranking out movies and serials by the carload, mainly Westerns featuring Wayne, Autry and Rogers. Unlike other independent studios, Republic frequently had higher budgets for their product, and by the mid 1940s they were occasionally making A-quality movies, including Johnny Guitar and The Quiet Man. They also tended to adhere to The Hays Code as much as they could, unlike many other independent producers, which tended to dodge the code or avoid it outright. And with the Fall of the Studio System, that meant more money could be injected into production, with some late '40s/early '50s releases even having color!

But the good times couldn't last forever. Television was making its mark, and drawing attention away from theaters. Republic embraced it at first, selling edited versions of their serials to TV stations. But they didn't have the financial means to produce many shows themselves, so they rented out their lot to MCA (which at the time was primarily a talent agency) and their Revue TV production firm; this kept the studio afloat for most of the '50s. But as the market demand for movies and serials waned, Republic attempted to cut back; it wasn't enough, and in 1958, Yates tearfully announced the end of film production by Republic. The next year Victor Carter, a businessman specializing in turnaround of failing firms, acquired the majority of Republic, and diversified its' assets in fields other than movies and TV. By the 1960s, the library of films and serials had been sold to National Telefilm Associates (a firm founded in 1954 which primarily handled distribution of movies and some cartoons from 20th Century Fox and Paramount, respectively), while the studio lot (which MCA had vacated upon their purchase of Universal) was sold to CBS.

By the 1980s, NTA had made a killing on syndicating and licensing the Republic library, and realized that the name was valuable—therefore, in 1985 NTA bought the logo and trademark, and became the new Republic Pictures Corporation. Its existing home video division became Republic Pictures Home Video, and they commenced production and distribution of new films—though not many of these actually received theatrical releases. They also formed a TV production/distribution arm, mainly making TV movies and miniseries, with the occasional regular series like Beauty and the Beast (1987), and distribution of shows like Press Your Luck (for reruns only—a plan for first-run syndication having failed). They also notably had the rights to It's a Wonderful Life, having managed to acquire the entirety of the movie by 1993, after winning a landmark legal case that reactivated the film's trademark.

In 1994, Spelling Entertainment, operated by legendary TV producer Aaron Spelling and owned by video rental chain Blockbuster, bought Republic (resulting in Spelling's Worldvision Home Video merging with Republic's video operations); shortly thereafter, Blockbuster was bought by Viacom, which had also just acquired Paramount (ironically enough, given NTA's ownership of many Paramount cartoons). For the rest of the decade, Spelling and Republic's film and video operations were slowly wound down and absorbed into Paramount's far larger holdings, though Republic's library would be licensed out to Artisan Entertainment (later absorbed into Lionsgate) for video releases starting in 1998. Viacom became full owner of Spelling Entertainment in 1999, and the following year, acquired CBS, reuniting the original Republic library with the studio much of it was shot on, by then known as CBS Studio Center.

In 2006, Viacom changed its name to CBS Corporation and spun off the company's motion picture and basic cable interests as a new Viacom. This had the effect of reversing the 1994 Spelling/Republic merger, with the former Spelling Entertainment Group theatrical and direct-to-video libraries being held by the Melange Pictures subsidiary of Paramount, who has licensed home media rights to this library to Olive Films since 2012 after the licensing deal with Lionsgate expired, and the former Spelling Entertainment Group television library being held by the Spelling Television subsidiary of what has been known as CBS Studios since 2020. Also in the split, CBS Corporation assumed ownership of CBS Studio Center.

Gunsmoke, Gilligan's Island, The Mary Tyler Moore Show, WKRP in Cincinnati, American Gladiators and That '70s Show are amongst many other shows and even movies, that have been taped and filmed at what was once the Republic lot and now CBS Studio Center.

In 2019, Viacom and CBS Corporation re-merged, forming ViacomCBS, which changed its name to Paramount Global in 2022. This had the effect of reuniting the film and TV libraries of Spelling Entertainment Group, and being a second merger of Spelling and Republic. The company announced it would sell CBS Studio Center to Hackman Capital Partners and Square Mile Capital Management in 2021, once again separating the original Republic library from the lot it was filmed on.

The company is still fondly remembered amongst both cinephiles and the general public for its wide range of movies and serials that, even despite low budgets, still became memorable thanks to both big stars and the efforts of their crews.