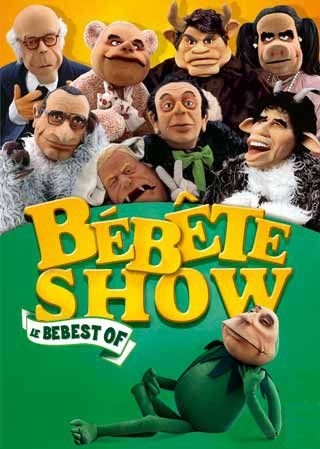 Imagine Spitting Image with some of the characters having animal bodies resembling those of The Muppet Show, and it's about French politics of The '80s. You'll have a good idea of what you're in for.

Le Bébête Show is a French puppet show that satirized national politics in the form of parodic news. It was created by writers, journalists and comedians Jean Amadou, Stéphane Collaro and Jean Roucas, who frequently appeared in it as human guests, and the puppets were made by Alain Duverne and his workshop. The word "bébête" aptly translates as both "silly" and "beastie".

It aired on TF1 from 1982 to 1995. Minus one year, that was the entirety of the two presidencies of François Mitterrand, of which the show became a symbol of sorts, the same way Spitting Image was one for the Margaret Thatcher era in the UK. The main host, Kermitterrand, was precisely based on him, basically Kermit with his face. Other characters from The Muppet Show got turned into French politicians, while an increasing number of other politicians got turned into animals that have nothing to do with The Muppet Show whatsoever.

The show's golden years were clearly the 1980s, when it was the most well known source of political satire on French television. When entering The '90s, it faced another political satire puppet show, Canal+'s Les Guignols de l'Info, which started in 1988, also had puppets by Alain Duverne, and gradually replaced it. While the quality and ratings of the Guignols increased, those of the Bébête Show declined. After a revamp titled Le Bar du Bébête Show that dropped the animal caricatures failed to improve audience ratings, the show ended in 1995, right after the presidential election that Jacques Chirac won and about six months before the death of François Mitterrand in January 1996.