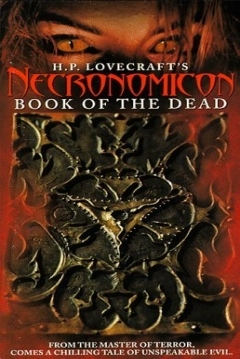 H.P. Lovecraft's Necronomicon is a 1993 horror Anthology Film directed by Brian Yuzna, Christophe Gans, and Shusuke Kaneko. Jeffrey Combs plays H. P. Lovecraft in the Framing Device as he visits a mysterious monastery to read an edition of the Necronomicon.

"The Drowned" is about a man (Bruce Payne) inheriting a seaside mansion from his late uncle (Richard Lynch) before finding his uncle's journal and discovering the horrors that took place there.

"The Cold" is about a young woman moving into a boarding house where she meets a kindly doctor (David Warner) who has been keeping himself immortal by harvesting other people.

"Whispers" is about a female cop (Signy Coleman) trying to rescue her partner (Obba Babatundé) from a killer known as "The Butcher" by tracking him down into the caverns where he hides out.