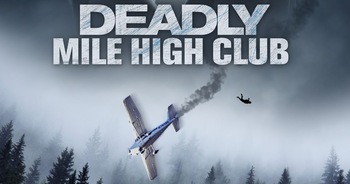 Deadly Mile High Club is a 2020 Lifetime Movie of the Week, a Thriller written and directed by Doug Campbell.

Tanya Jackson (Allison McAtee) is a pilot still haunted by a tragic accident in which she crash-landed a plane, killing her hot boyfriend Jake. Now working as a flight instructor, she's delighted to find that among her new crop of students is...a hot guy named Jake. That's Jake Sherman (Marc Herrmann). Unfortunately for Tanya, he's married. Fortunately for Tanya, it's not a very solid marriage to cute, perky, fedora-loving Annie (Anna Marie Dobbins). Their sex life has dwindled, and she's still close to her mother-in-law Margaret Harris (Diane Robin), a loud, arrogant woman who openly loathes and insults Jake, who she thinks is wasting his time learning to fly when he's supposed to be prepping to take over her family business when she retires.

Tanya aggressively puts the moves on Jake, who seems receptive at first but backs off before anything gets serious. After rejecting Tanya's advances, Jake also decides to take on another flight instructor, stunt pilot Gonzo Rogers (Damon K. Sperber). But Tanya will let nothing or no one stand in her way as she pursues Jake.

Featured in an episode of How Did This Get Made?.