Film / Stalked By My Doctor 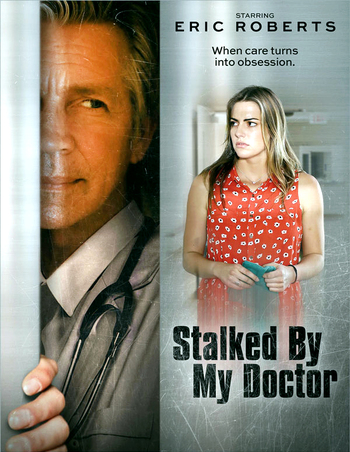 HE IS A DOCTOR!!! HE'S A DOCTOR!!!
"These movies are so extreme and very dumb; Eric Roberts manages to pull them off somehow."
— Lifetime Uncorked

Stalked by My Doctor is a Made-for-TV Movie Thriller franchise on the Lifetime network.

The movies star Eric Roberts as Dr. Albert Beck. Beck, an eminent California cardiologist, is a wealthy Silver Fox, but is also single. He desperately wants to be in a relationship, but has some trouble when it comes to dealing with females. Attempted relationships with adult women usually fizzle out, because he comes on way too strong and is Not Good with Rejection. However, he also has an eye for girls in their late teens. After he saves the lives of several young women, he fantasizes about starting a Rescue Romance with them, leading him to engage in some desperate Yandere tactics toward them. While this is a standard Thriller premise, the Ham and Cheese acting of Roberts and scripts that tend toward self-aware Camp have given these movies a cult following. Thus far there have been five movies.

The Stalked by My Doctor franchise contains examples of: