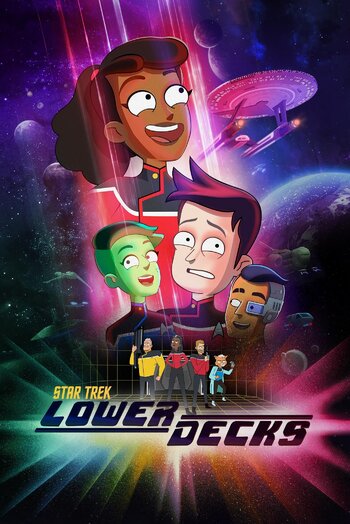 The crew of the USS Cerritos.note Clockwise from top center: Beckett Mariner, Brad Boimler, Sam Rutherford, T’Ana, Jack Ransom, Carol Freeman, Shaxs, and D’Vana Tendi.
"First Contact is a delicate, high-stakes operation of diplomacy. One must be ready for anything when humanity is interacting with an alien race for the first time… but we don't do that. Our specialty is Second Contact. Still pretty important. We get all the paperwork signed, make sure we're spelling the name of the planet right, get to know all the good places to eat…"
— Ensign Brad Boimler, "Second Contact"
Advertisement:

Star Trek: Lower Decks is an American animated Work Com aimed for teens and adults set in the Star Trek universe. Created for CBS All Access by Mike McMahan (Rick and Morty, Solar Opposites), it is the first animated series created for CBS All Access, and the first animated Star Trek series since Star Trek: The Animated Seriesnote although there are two episodes of Star Trek: Short Treks that were also animated. The series follows the exploits of the support crew serving on the U.S.S. Cerritos, one of Starfleet's least important ships, in the year 2380. This sets it between Star Trek: Nemesis (2379) and the prologue of Star Trek (2387), a period of relative peace for the Federation between the end of the Dominion War and the collapse of the Romulan Star Empire.

A group of four ensigns have been assigned to the Cerritos. Each of them is following a different career path and is a Bunny-Ears Lawyer at best. They are unappreciated by the senior staff and are the lowest-ranking members of the ship's crew, but they still manage to accomplish great things due to their friendship.

It debuted on August 6, 2020, and its first season consists of 10 episodes. Outside of the US, Canada premiered it same-day on the CTV Sci-Fi channel and on the French sci-fi network Z, as well as on the Crave streaming service. International distribution for the series will be provided through Amazon Prime, with the entire series released on January 22, 2021 in Australia, New Zealand, Europe, Japan, India, "and more", per the show's creator Mike McMahan. The show's second season premiered on August 12, 2021 (by which time CBS All-Access had become Paramount+). The show had already been renewed for a third season before the second started airing; likewise, a fourth season has been announced

well ahead of the third. The third season is currently set to premiere on August 26, 2022.

See the season one trailer here

, the teaser for season two here

, the full trailer for it here

, and the season three trailer here

The Power of Math

The Power of Math