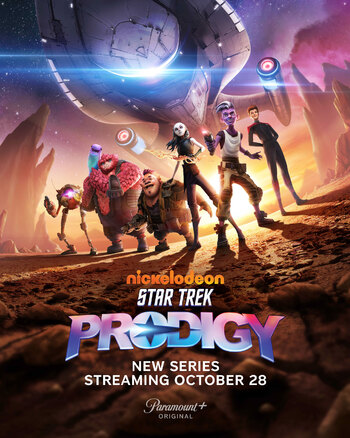 A Crew Like You've Never Seen Before.note From left to right: Zero, Murf, Rok-Tahk, Jankom Pog, Gwyn, Dal, and Hologram Janeway.
"When the Federation first formed, it wasn't pretty. A collection of species, entirely unfamiliar to each other. Different languages, different cultures, but with one shared aspiration: to be better. I've seen my share of wayward crews, and I can tell you this -– you've got potential."
— Hologram Janeway
Advertisement:

Star Trek: Prodigy is a 2021 Science Fiction animated series created by The Hageman Brothers (Trollhunters; Ninjago). The series premiered on October 28, 2021, first on Paramount+, then on Nickelodeon. It is the third animated Star Trek series, following Star Trek: The Animated Series, which reran on Nickelodeon back in the 1980s & 90s and Star Trek: Lower Decks, a CBS series which premiered in 2020.

In 2383, after the events of Star Trek: Voyager, a motley crew of young aliens in the Delta Quadrant find an abandoned Starfleet ship, the U.S.S. Protostar. Taking control of the ship, they must learn to work together as they make their way towards the Alpha Quadrant.