Recap / Star Trek: The Next Generation S5E19 "The First Duty" 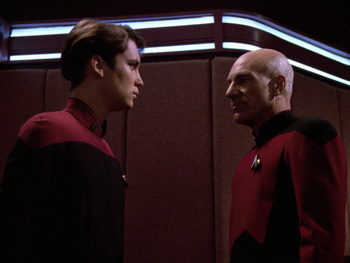 Picard ends the lie of Wesley and co, in true Picard fashion.
"Nick Locarno, he watches out for them. He keeps them together. Nick is what makes that team special. He's their coach, surrogate father and best friend all in one. A natural leader. The members of that team love him. If he asks them to do something, they do it, even if it means going right over a cliff."
— Boothby
Advertisement:

The Enterprise returns to Earth for Starfleet's commencement ceremony, where Picard is scheduled to give the address, only to learn that Cadet Wesley Crusher has been involved in a tragic incident; he is not seriously harmed, but his friend, classmate, and fellow member of Nova Squadron Joshua Albert has died in a flight accident. When Picard tries to learn more about what happened from Wesley, the young cadet is evasive about the subject. The discussion is interrupted by Nicholas Locarno, a classmate and Wesley's leader in Nova Squadron, who is just as saddened over Albert's death as everyone. When Picard leaves, however, Locarno tells Wesley not to worry about the inquiries; they have nothing to fear, so long as they stick together...

When Locarno, Wesley, and their squadmates are called in for the inquiry, Locarno recounts how Nova Squadron was attempting a Yeager loop near Saturn's moon of Titan in the diamond slot formation, but Albert's shuttle collided with another, causing a chain reaction that lead to all five ships in the squadron being destroyed. Everyone except for Albert were able to transport to safety. Jean Hajar, the squadron's navigator, reluctantly admits that she had changed their flight plan. Sito Jaxa, who was flying in the rear, claims to not be aware of how the accident occurred exactly due to flying by sensors alone—not a recommended procedure for the maneuvers they were attempting. Locarno manages to defuse the situation by placing blame on Albert, who he claims panicked while flying and caused the accident.

The proceedings are dismissed afterwards while data from Wesley's flight recorder is examined. Locarno reminds Wesley to trust in him.

While the proceedings are in recess, Picard and La Forge look into the accident themselves. Meanwhile, Wesley and the other members of Nova Squadron are stressed over the investigation, but Locarno warns them that they must stay together. He tells Wesley that his flight recorder was damaged in the accident and only has data on what happened before the crash, so Wesley doesn't need to testify to anything his recorder doesn't prove. Wesley doesn't feel comfortable lying, but Sito suggests not to lie, but simply to not volunteer any more information.

After meeting with Albert's father and realizing that even he blames his son for the accident, Wesley tells the inquiry board what Locarno coached him to say. However, a satellite had recorded their ships in a very different formation than the one he describes, for which Wesley has no explanation...

Even in spite of contradicting evidence from the satellite, everyone, especially Beverly, believes Wesley's story and plans to try to delay the inquiry, distressing Wesley. All the while, Picard continues to investigate the accident on his own. He learns from Boothby, the kindly old groundskeeper, that after winning the Rigel Cup, Wesley and the other members of Nova Squadron became highly popular among fellow cadets, and that the entire squadron were loyal to Locarno. La Forge can't find any evidence as to what exactly caused the accident, but does find one peculiar detail regarding Wesley's shuttle: its plasma interlock was open, when it was supposed to be closed to prevent the shuttle's plasma from igniting. This leads Picard to a harrowing realization...

Picard orders Wesley to his ready room, where he reveals to the young cadet that he knows exactly what happened: Nova Squadron was attempting a Kolvoord Starburst maneuver, in which five shuttles cross each other in formation while emptying their plasma exhaust and igniting it, creating a spectacular starburst pattern. The Kolvoord Starburst maneuver was banned by Starfleet Academy over a hundred years ago after the last attempt by cadets resulted in the deaths of all involved. Picard believes Locarno wanted to leave the Academy in a blaze of glory, and manipulated Wesley and the others into performing the maneuver. Wesley tries to feign ignorance and claim that he told the truth at the inquiry, but Picard knows that Wesley only told a half-truth, which he considers the same as a lie. He recounts how, when he let Wesley onto his bridge and saw how the prodigious young man knew every control in his captain's chair, he saw great potential in him, promoting him to acting ensign and later helping him enter Starfleet Academy. Now worrying that he made these decisions in error, he gives Wesley an ultimatum: if Wesley will not tell the truth to the inquiry board, Picard will.

When Wesley returns to Earth, he recounts his discussion with Picard to Locarno. Locarno tells Wesley he only needs to dispute Picard's claims at the inquiry, but Wesley no longer feels comfortable lying and plans to tell the whole truth. Locarno accuses Wesley of betraying the team, and suggests that Wesley should instead resign his commission to save the team. After all, Locarno would do the same for them...

When the inquiry resumes, the members of Nova Squadron have their flight privileges revoked and a reprimand placed on their permanent records. Just as the proceedings are adjourned, however, Wesley speaks up and confesses that Albert died after being pressured into attempting the Kolvoord Starburst maneuver. In the face of the truth coming to light, Locarno remains silent.

In the end, Locarno is expelled from the Academy. Wesley feels he should've been expelled as well, but Picard explains that Locarno saved his squadmates' careers by taking full responsibility for Albert's death. "Just as he said he would," Wesley muses. Remaining at the Academy will not be easy, however; Wesley's credits for the year have been annulled, and he will have to live with the stigma of his actions among his peers. Picard, however, is satisfied that Wesley stepped forward in the end. He knew what was the right thing to do; all he needed was a push...