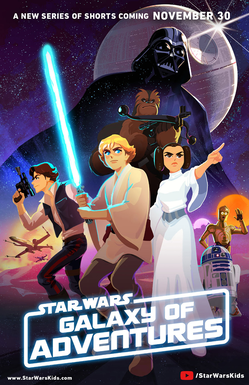 "In the Star Wars galaxy, every day can be an adventure."
— Narrator
Advertisement:

Star Wars: Galaxy of Adventures is a Lucasfilm animated web series with shorts revisiting key scenes from the films, introducing characters, and explaining the Star Wars universe to a younger audience. Unlike Star Wars: Forces of Destiny, this series recycles dialogue from the original films, reediting them and presenting them as animated shorts.

The series debuted on the Disney YouTube channel in November 2018. The preview can be seen here

. The whole series to date can be found here.