Western Animation / Hulk and the Agents of S.M.A.S.H. 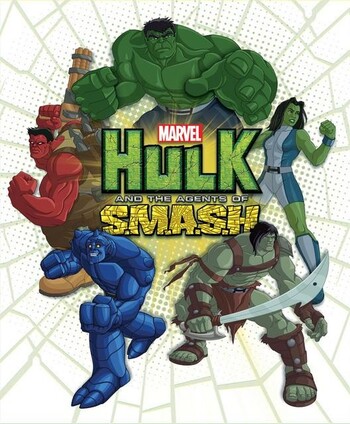 Hulk and the Agents of S.M.A.S.H. is an Animated Adaptation of Marvel Comics' popular The Incredible Hulk franchise. The series features the Hulk teaming up with She-Hulk, Red Hulk, Skaar, and A-Bomb to fight threats too great to handle alone. The series aired alongside Avengers Assemble and Ultimate Spider-Man on Disney XD's Marvel Universe block.

Agents of S.M.A.S.H. features the voices of Fred Tatasciore as the Hulk, Clancy Brown as Red Hulk, Eliza Dushku as She-Hulk, Seth Green as A-Bomb, and Ben Diskin as Skaar. The series is produced by Marvel Animation and overseen by Paul Dini, best known for his work on Batman: The Animated Series and DC Comics' DC Animated Universe.

Aired for two seasons and ended in 2015 with 52 episodes. It was replaced with Guardians of the Galaxy (2015).

Not to be confused with Agents of S.H.I.E.L.D., which is another Marvel series, taking place in the Marvel Cinematic Universe.

Tropes applying to Hulk and the Agents of S.M.A.S.H.