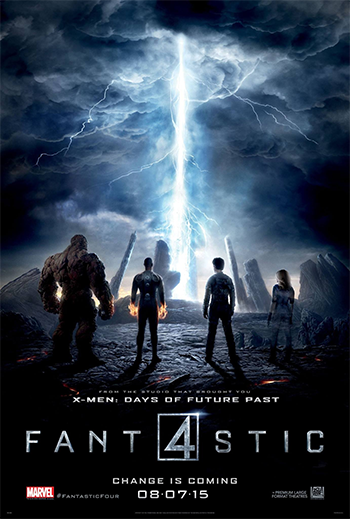 When you change the world, prepare to defend it.
"We are stronger together than we are apart."
— Dr. Franklin Storm
Advertisement:

The film serves as a Continuity Reboot for the Fantastic Four film franchise, and has no connection to the two previous film iterations. Its story follows Reed Richards, a brilliant scientist researching travel into Another Dimension. However, when a test involving him and four other subjects goes horribly wrong, the surviving four must adapt to their rapidly changing bodies before the fifth survivor returns to wreak havoc.

Like The Amazing Spider-Man Series and X-Men Film Series, the movie is not part of the Marvel Cinematic Universe. While the movie was originally conceived as taking place in the X-Men film continuity (which Fox also owns), it was later decided that the movie should exist in a standalone universe for the purposes of allowing greater creative freedom toward the team working on the film. Following the release of the film, the possibility of an X-Men crossover was abandoned entirely by Fox's own admission.

The film is noted for its notoriously Troubled Production in regards to getting the film out on time to retain the rights, the director's hostile and erratic behavior, and the Executive Meddling required to get the film finished. Following the movie's critical and commercial failure, Fox would cancel the planned sequel as well. In spite of future plans effectively chalking up to a Stillborn Franchise, the film was one of the first that Fox would release on the 4K Ultra-HD Blu-Ray format.

In November 2017, a little over two years after the movie was released, Disney revealed that they would end up buying a large portion of Fox's entertainment assets, including 20th Century Fox, and by extension, the Fantastic Four and X-Men film rights. After sealing the initial deal in December 2017, Disney would complete the acquisition in March 2019. Disney CEO Bob Iger confirmed that there are plans to make use of the Fantastic Four IP within the Marvel Cinematic Universe, which Marvel Studios President Kevin Feige would confirm that a new film was being developed as part of Marvel's post-Phase 4 slate.