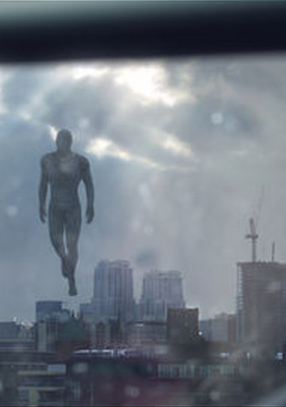 Look. Up in the sky...
Advertisement:

A 2013 short film by director and visual effects artist Marcus Alqueres, The Flying Man ruthlessly examines and deconstructs both the Vigilante Man trope and the character of the Superman-like Übermensch.

News reports start coming in of an unidentified humanoid figure flying through the skies of an unnamed city. At first, officials and citizens are just trying to get a good look at the guy, but fascination quickly turns to horror when the figure starts attacking and brutally murdering people on the streets with terrifying displays of Super Strength. When the victims are all identified as having extensive criminal records, though, people start asking: is this justice? And do we even have a say in the matter?

You can watch The Flying Man for free on Vimeo here