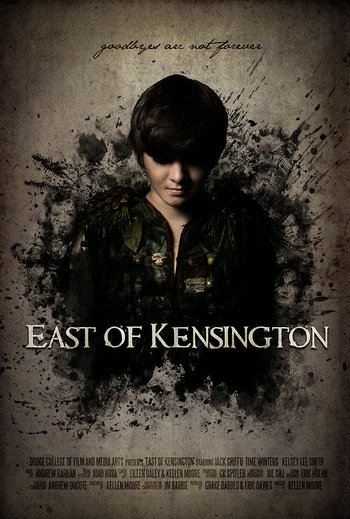 Peter's imaginary Wendy: Goodbyes are not forever, Peter.
Peter: Rest well boys, for in the morning you will have a mother again.
Alex Curran Supervising Producer: So instead of assuming everyone lived happily ever after East of Kensington explores the other option.

A nearly twenty-minute short film that took two years to finish, East of Kensington was made by a band of students from "Chapman University Dodge College Of Film And Media Arts" about the childhood icon Peter Pan. In this story the students worked to show some of the darker aspects of the J.M. Barrie tale that often gets forgotten about, handwaved, or ignored in other adaptations by taking a more realistic approach.

Years after Peter Pan and the Lost Boys have overthrown the pirates, Peter visits London to return Wendy to Neverland and is kidnapped by a mysterious Stranger residing in the decaying remains of the Darling House. Peter is forced to confront a harsh reality that challenges his innocence.

The Indiegogo Promo can be watched here.

The bloopers for the promo can be watched here.

The trailer for the film can be seen here.

The film itself can be viewed here

. Alternatively, if that link doesn't work, then you can watch the (shortened) version here

on their official channel or watch the full version here