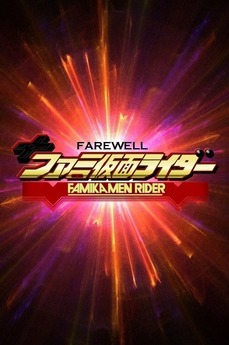 Farewell, FamiKamen Rider is a 2015 film, written by Kaylyn and Josh Saucedo, based on the works of Justin "JewWario" Carmical. The film was created to conclude the story of the FamiKamen Rider that began in Carmical's You Can Play This!. The story began as a running plot line in You Can Play This!, with a movie Kickstarter funded and in pre-production. However, following Carmical's suicide, the saga was incomplete and the story left hanging. Kaylyn and Josh took it upon themselves to write a new script and see the project to fruition, and a rough cut of the film was screened at Magfest 2015. The full film was released online April 15th, 2015.

The story begins where this video

left off. After a showdown at Con G in 2012, the FamiKamen Rider is missing in action. MarzGurl is attacked by masked goons outside the convention while trying to escape. She attempts to Henshin (transform into the Warion), but the belt rejects her as it was not designed for anyone but a Warion to use. She manages to escape with his Henshin belt, but the cartridge is blasted away in the explosion of energy caused by the backlash of her unsuccessful transformation.

Three years later, a video game enthusiast from San Antonio, Texas (named Chris) happens upon the cartridge at a yard sale. Unable to use it and believing it to be broken, he posts a picture of it on a video game forum in an attempt to find someone to help him fix it. Later that day, he is suddenly attacked by the same Mooks who ambushed MarzGurl outside the battle three years ago. MarzGurl swoops in and saves him, and the two embark on a journey to find the FamiKamen Rider.

Kaylyn has since come to regret making the film after Justin Carmical's sexual assaults came to light, but decided to let the movie remain available for "historical purposes".