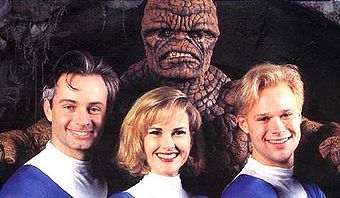 In 1992, The Constantin Film production company held the film rights to the Fantastic Four comic book, but they were about to lose said film rights unless they began production by December of that year. Since both the budget and the technology necessary for such a venture were lacking at the time, they instead opted to do a very low-budget film produced by Roger Corman and directed by journeyman music video director Oley Sassone

; this was done as an Ashcan Copy to maintain the rights, and it was never released in theaters or any home media. However, a release date was set for 1994 and the cast and crew were told the film would be released. Although Stan Lee says that it was never intended to be released, Corman and producer Bernd Eichinger claim that they did plan to release it, but Marvel executive Avi Arad, fearing that it would cheapen the franchise, bought the film for the amount of money Constantin spent making it and ordered all prints destroyed.

According to some fans and critics who got their hands on the movie (circulated via bootleg video at comic-cons and such), not getting released was the best thing about it (though the Thing's costume is also considered a rare high point). Other viewers exhibit rabid devotion to it and demand an official DVD release. Most people (outside of Arrested Development fans) are unaware that the film even exists.

. More information can be found here

at The Agony Booth, or here

Not to be confused with the 20th-Century Fox films (on which Constantin also produced). Or the inevitable Marvel Studios-produced film, set to be a part of the Marvel Cinematic Universe.

The documentary created in 2015, called Doomed! The Untold Story of Roger Corman's The Fantastic Four, gives these details and much more.