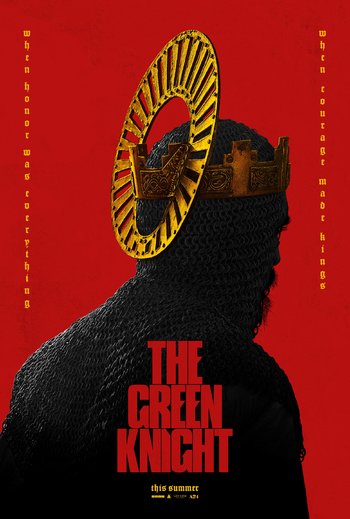 When honor was everything. When courage made kings.
Essel: This is how silly men perish.
Gawain: Or how brave men find greatness.
Essel: Greatness? Why is goodness not enough?
Advertisement:

The Green Knight is a 2021 Dark Fantasy film written and directed by David Lowery and starring Dev Patel, Alicia Vikander, Joel Edgerton, Sarita Choudhury, Sean Harris, Kate Dickie, Barry Keoghan, Erin Kellyman, and Ralph Ineson. It is based upon the classic Arthurian Legend tale Sir Gawain and the Green Knight. It was initially set to be released in May 29th, 2020 in the United States by A24, but its release date was moved to July 30, 2021 due to the COVID-19 Pandemic.

Patel stars as Gawain, the reckless and headstrong nephew of King Arthur (Harris). Following an encounter with the titular Green Knight (Ineson), Gawain must embark on a dangerous, perilous journey to confront the Knight and to discover who he is.

an RPG, The Green Knight: A Fantasy Roleplaying Game, to act as an introduction to the world of the film.

The Green Knight contains examples of: