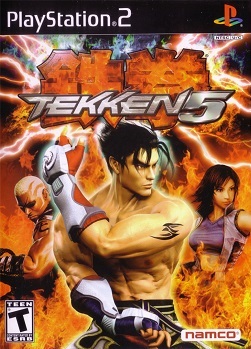 Welcome to the King of Iron Fist Tournament 5.
Tekken 5 is a 3D fighting game and the fifth main installment of the Tekken series. Developed and published by Namco, it was released in 2004 for the arcades and 2005 for the PlayStation 2. The arcade version uses the Namco System 256 arcade board, an upgraded version of Namco System 246, based on the PS2.
Advertisement:

The game is mainly noted for bringing the series "back to its roots" after Tekken 4, whose radical gameplay changes garnered mixed reception among the fanbase. New to the series is Crush, a feature in which different moves have different vulnerabilities (such as a jumping attack being unable to be countered by a low kick). Uneven stages have been discarded, with the game being strictly set on a flat plane, and infinite stages also make a comeback. Though wall juggling returns, it has been modified so it can be abused less, so characters will not be able to juggle their opponent again and again. In general, the game feels much faster compared to its predecessor.

Revisiting the roots also extends to non-gameplay areas as well. While the art style is carried over from the previous game, the characters' costuming, stage designs, and story are more in line with the pre-4 games. 4 is noted for attempting to ground the series to reality, something that 5 brushes off in favor of the fantastical elements of older games. Some of the most radical changes in characters' costumes (such as Hwoarang's military uniform and Heihachi's mawashinote Often mistaken to be diaper) have also been removed.

The console version features the debut of the character customization feature, including the ability to edit the costume's color. Every character's Story Battle includes cutscenes in the sub-boss stages, either 4, 7, or 8.note In 4, only the plot-relevant characters have one and only then near the end. Instead of advancing through a set of 9 stages, Arcade Battle pits the player in an endless string of ranked matches against ghost CPUs, with the player earning ranking promotions or demotions by beating or losing against certain opponents. In place of Tekken Force, the game has "Devil Within", an action minigame with Jin as the sole playable character as he fights his way through a secret Mishima Zaibatsu facility. 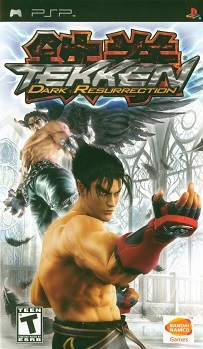 The arcade version received two updates. Rebalancing aside, the first, Tekken 5.1 adds no new content, other than recoloring the health bar from yellow to green. The second, Tekken 5: Dark Resurrection, is a bigger deal. It adds 3 new characters, a slew of new items, and thematic variations of all stages and BGM in the original game. The interface is completely changed and every character's clothing has different color palette (for example, Xiaoyu's qipao is recolored orange from pink).

Dark Resurrection was ported to the PlayStation Portable and PlayStation 3 via online download (in the former as Tekken: Dark Resurrection), marking the first time that a Tekken game was released for a seventh-generation console as well as the first with online play. The PSP version adds Tekken Dojo, where you advance through six dojo by winning battles, and Gold Rush, whose objective is to earn gold by winning matches. It also sees the return of Tekken Bowl and Command Attack from Tekken Tag Tournament and Tekken 4, respectively. The PS3 version was created as an arcade-perfect port and does not feature Story Mode. Online matches were also not available until half a year after release.

Playable characters in the game include:

Jinpachi Mishima, the Final Boss of this game, is unplayable in the arcades, PS2, and the PSP. He is added as a playable character in PS3.

Tropes provided by the game include:

Example of:
Strapped to a Rocket