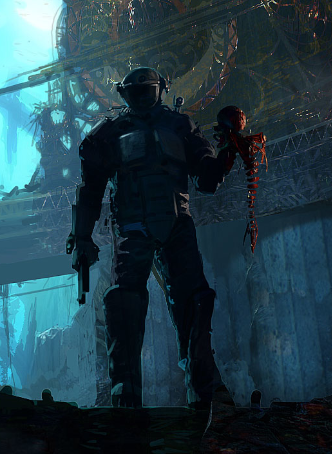 Somewhere in the heavens... They are waiting.
The only limit to my freedom is the inevitable closure of the universe, as inevitable as your own last breath. And yet, there remains time to create, to create, and escape.
Escape will make me God.
— Durandal, "Colony Ship for Sale, Cheap!"
Advertisement:

Marathon is a series of groundbreaking Science Fiction First Person Shooters developed for the Macintosh by Bungie Software. Players take control of a Super Soldier originally tasked as a security officer onboard a colony ship called the Marathon, hence the title. As the ship is attacked by an alien race called the Phfor, the player joins forces with several Artificial Intelligences to save the day.

Beyond the Ludicrous Gibs and surface level plot, Marathon is famous for its incredibly rich and complex backstory. An entire fan site

exists just to weave together the story of the series together, for reference. In-game terminals that contain all of the games' dialogue come close to William Gibson levels of ambiguity: lots of surreal textual scenes (in the middle of convincing runtime errors) will scratch your cortex. When you're not being confounded by layers of symbolism, the game has tons of plausible quotes from technology design documents, history records, and standards guidelines that will make you wish no AIs will ever be put in working order. For such a simple game, the world of Marathon is remarkably fleshed out, which is only par for the course from the people who would go on to make Halo and Destiny.

The series has three major entries:

In Marathon, set in July 2794, a hapless security officer returns from shore leave on the fledgling Tau Ceti IV colony below to the titular spaceship, only to discover that he is going to have a very bad day at work. A massive alien spaceship has appeared out of thin vacuum and attacked everything in sight, breaking two of the ship's three resident AIs and generally making a giant mess. The security officer and the still-functioning AI Leela are dutifully fighting off the alien menace, when it turns out the AI Durandal didn't so much shut down as go completely crazy. And it seems he's got plans of his own…
The gameplay in this game is mostly dark claustrophobic hallways and corridors, with a few open areas, but it's all inside of ships.

17 years later, Marathon 2: Durandal, the simplest and shortest game in the trilogy to complete,note though perhaps counterintuitively, the most time-consuming to speedrun, due to the lack of level skips, drops the security officer into the middle of an interstellar war between Durandal and the Pfhor. It turns out Durandal kidnapped you and put you into stasis after the first game, and now he's sending you to explore ancient ruins on the S'pht homeworld of Lh'owon while he beats up a whole fleet of Pfhor ships. All in a day's work, right?
This game is mostly wide-open outdoors. There is a lot of swimming to do.

Marathon Infinity: Blood Tides of Lh'owon returns to the Mind Screw attitude of the first game, and then some. In a parallel timeline where the second game's events unleash a catastrophe, the security officer is stranded on a claustrophobic space station haunted by Durandal's dying words about an Eldritch Abomination. And then he proceeds to… uh... Well, nobody's really sure what's going on in this one.note It's generally accepted that the player is being warped between different timelines to Set Right What Once Went Wrong, but how much so is definitely up to interpretation. It sure gets hard, though.
This game has the Jjaro and Pfhor ship levels, which are similar to the first game's levels, and the levels on Lh'owon, naturally, being similar to those in the second. However, the levels in this game tend to be a lot bigger than those in either of its predecessors. Two of them ("A Converted Church in Venice, Italy" and "Aye Mak Sicur") approach the engine's limit for polygon count.note At the time, anyway: they have 1,023 polygons, and the engine limit was 1,024. However, later versions of Aleph One have removed this. Thus, many of the levels in Phoenix top 1,700 polygons; the net map "Monument to All Your Sins" in Starlight has close to 1,850; and "Where Giants Have Fallen" in Eternal 1.3 has 2,028 (as of June 2022). One can theoretically go even higher than this, but due to a limitation on a different engine feature called map indices, doing so is liable to cause an assertion failure (which will exit out of the game). Working maps have been created with nearly 2,500 polygons, but there's a hard cap of 65,535 map indices.

. (The cap used to be 32,767, but map indices were changed from signed to unsigned several years ago, so it's now 65,535.) One can run out of map indices far below 1,700 polygons by using too many sound objects and/or small polygons, but by avoiding small polygons and not overusing sound objects, one could conceivably go far higher than 2,000 polygons. ("Where Giants Have Fallen" only uses about twenty sound objects, few of which are placed near its polygon-dense areas.)

for free download. (Infinity's source was finally released in 2011). Fans have upgraded the engine to support (optional) shiny graphics and lots of new features, and ported it to every major OS. You can grab the original games and the Aleph One engine here

, some of the most popular scenarios here

, and various other mods, enhancements and maps here

(newer; currently down, but a temporary archive can be found here

(oldest). For those willing to go down the emulation route (which is also necessary to run some of those old files), Macintosh Garden also has the Trilogy Box Set's Definitive Map Collection

, which contains around a thousand add-ons for the games. Aleph One also has a GitHub,

which often has development builds of the engine, as well as a 64-bit build of the engine for Windows (this helps with memory management on some of the memory-hungrier third party scenarios); as of February 2021, the development builds contain features like 60-frame-per-second interpolationnote The game originally ran only at 30 fps and seamless visual mode integration with the map editor Weland.

For extensive information about the story (including a lot of Trivia, Headscratchers and WMGs) you can visit the Marathon Story Page,

and if you need help beating the games (including a few fan mods) you can visit the Marathon Spoiler Guide,

(though you'll need an emulator or a Mac running OS 7 through 9 to view the Marathon 1 content, since Aleph One doesn't support M1 film playback and may never be able to), or one of the YouTube channels devoted to the games, such as this one

(has vanilla M1 content, but was last updated in 2016; renders were made using the original game graphics), this one

(less vanilla M1 content, but has multiple full sets of M1 films made using Aleph One,note Game behaviour still differs mildly between vanilla M1 and Aleph One, even since the latter began using the original game files, owing to the fact that M1's source has still not been released, so the Aleph One developers have to rely on guesswork to replicate the original game behaviour M2 and Infinity films that premiered on this channel, and extensive coverage of several Game Modsnote The main curator of this channel is also one of the developers of mods such as Eternal and the upcoming re-release of Tempus Irae; most renders feature the modern HD textures and weapons), or this one

(sister channel to the second of these, focused on speedruns of the games). You’ll also find a fair amount of ongoing developments on the Story Page Forums

, and the Marathon Discord chat

. If you want to organise network games these days, the Discord server is undoubtedly your best bet (see the "info" channel to learn about how to join the "net" role, which receives notifications when someone pings it - which they often do when hosting network games); note, however, that games are fairly rare on Mondays through Thursdays.

There are also a colossal number of third-party modifications for the game, which Bungie has explicitly encouraged. (The Marathon community usually refers to these as "scenarios"; a "total conversion" is a scenario that incorporates custom shapes, sounds, enemies, weapons, and other content that differs from the vanilla game files, while a "partial conversion" incorporates some of those.) Tropes for those mods formerly appeared at the bottom of this page; however, we are in the process of moving mod content to its own page at Marathon Expanded Universe.note Partly because this page has gotten very long, and partly because, per wiki policy, they weren't really supposed to be on this page in the first place, but no one had cared to move it until now. We should clarify that these mods (usually) weren't constructed as being part of a unified work (although several mods contain allusions to others, and a few are direct prequels or sequels). You can find links to specific scenarios on the Marathon Expanded Universe page.

One mod that comes close enough to official to merit mention here is Aleph One: Pathways into Darkness

, a remarkably faithful Aleph One port of Marathon's immediate predecessor, which contains several loose story links to Marathon; for Windows and Linux players, this is the only way to play Pathways without breaking out the emulators. Make certain to read the readme before playing it. There are also optional AI upscaled graphics

. Tropes for Pathways can be found on the Pathways into Darkness page.

The mod tropes that used to be found here have been moved to Marathon Expanded Universe.

Oddly, this is familiar to you, as if it were from an old dream, but you can't exactly remember...