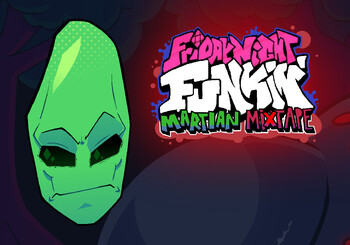 It was done by aliens!
Advertisement:

is an absurdly ambitious full overhaul mod for Friday Night Funkin' by HThagomizer, currently featuring 4 weeks with new antagonists to match. Go up against a neurotic alien, an FBI agent, an alien's skeleton(????), and a weirdo conspiracy theorist in a brand new JAMMING set of weeks!

The mod originally released in May of 2021, with only the first week added. The other three all dropped at once in July of 2021, alongside a refurbished week 1.