open/close all folders
The Hero 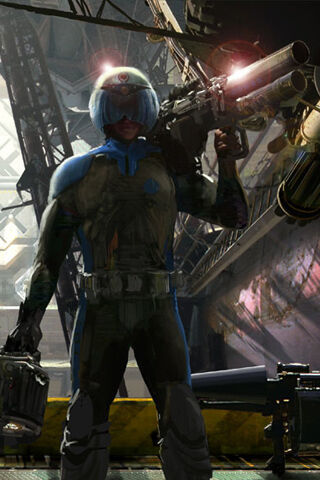 I have been Roland, Beowulf, Achilles, Gilgamesh. I have been called a hundred names and will be called a thousand more before the world goes dim and cold. I am hero

The main character of all three games, who is somewhat of a Heroic Mime archetype. He rarely, if ever, utters a single word. His motivations are unknown, if he has any to begin with, and is mainly commanded by the three AIs over the series. Whether or not he's even a hero, or just someone who is exceptionally good at getting his job done is up for debate.

SMUG INTELLECTUAL. Formerly-rampant human-coded AI with a sense of humor seeks bipedal oxygen-breathing cyborg for serious relationship in the galactic core. I've got cool guns if you like to break stuff. No yuppies.
— A Terminal in "Requiem for a Cyborg", Marathon 2: Durandal

One of three AIs aboard the Marathon, who has gone Rampant. Throughout the series, Durandal goes through the Anger and Jealousy stages of Rampancy, and eventually he appears to achieve meta-stability, the ultimate theoretical stage of AI existence. He's also a bit of a sociopath, and is willing to go to great lengths to achieve his goals. Whether or not he's evil, however, is up to interpretation.

DAMSEL IN DISTRESS. Captured and partially-disassembled human-coded AI trapped on alien homeworld seeks succor from a tall, dark and handsome cyborg with big guns. Let my rescue be the basis of a lasting relationship.
— A Terminal in "Requiem for a Cyborg", Marathon 2: Durandal

One of three AIs aboard the Marathon, and clearly the most sane. She's ready and willing to take back the Marathon.

GOD'S GIFT TO NEURAL NETS. Traitorous extremely-rampant reprogrammed human AI with no sense of humor seeks elusive, heroic cyborg of uncertain manufacture (you know who you are) for mindgames and long walks in hard vacuum.
— A Terminal in "Requiem for a Cyborg", Marathon 2: Durandal

One of three AIs aboard the Marathon. Initially falls victim to Durandal's rampancy, until the S'pht reanimate him—and then he goes rampant himself, of a decidedly more malicious turn than Durandal's.

SLEEPING BEAUTY. Long-deactivated extraterrestrial personality construct in search of gullible carbon-based cyborg (< 20% machine) to confuse, irritate and teleport randomly around an abandoned desert planet in the core. All answered.
— A Terminal in "Requiem for a Cyborg", Marathon 2: Durandal

An ancient S'pht AI left deactivated on Lh'owon since the the S'pht's fall to the Pfhor. Durandal has the Security Officer reactivate him to acquire his assistance against the Pfhor. The name "Thoth" was given to him by Durandal.

The Allies (most of the time)

The human race, who have just started exploring beyond the confines of the Solar System. As they do not yet have FTL travel, they are considered low-tech by the rest of the galaxy, and the slaver empire of the Pfhor has Earth in its sights as its next conquest.

One of the Pfhor's slave races. As they are cyborgs, the Pfhor use Mind Control to keep them under their thumb. In the first game, Durandal forges an alliance with a group of them, and begins assisting them in rebelling against the Pfhor.

An ancient and extremely advanced race of beings whose technology is occasionally found by the modern races. Not much is known about them, but what is clear is they were almost frighteningly technologically competent.
The Antagonists

A bipedal insect-like race that has formed a massive slaver empire throughout much of the galaxy. They have enslaved many races and have set their sights on humanity and Earth next. They are the primary antagonists, and the common threat to both yourself and Durandal.

Some sort of ill-understood creatures spoken of in ancient S'pht legend. They are said to "live in chaos" and spread chaos wherever they go, unraveling the fabric of the universe around them. In Infinity, it turns out that they are very real, and finding some way to escape their influence is the driving conflict of the game.